Manchester United Closing in on Signing of Torino’s Andrea Belotti 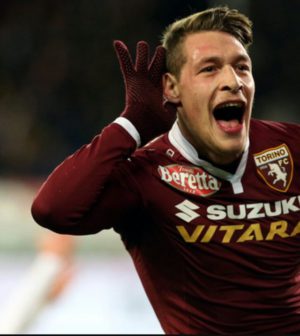 Manchester United will almost certainly be on the hunt for a new striker this coming summer, with José Mourinho’s side set to lose Zlatan Ibrahimović due to the horrific injury he suffered against RSC Anderlecht. Replacing his goals won’t be easy.

A potential replacement that Mourinho seems to have focused on is Torino’s Andrea Belotti. Now 26, the Italian is having himself a breakout season in Serie A, but he won’t come cheap. United would have to stump up a colossal £84 million to land the forward, according to the Daily Mirror.

Belotti is a player that intrigues me. He’s 26 now and this is really the only season we’ve begun to look at him as a real talent. It concerns me, as this is the first time in his career that he’s hit over 15 goals in a single campaign – although the 27 goals he has scored for Torino this year is mightily impressive. I’d be of the opinion that there are better options out there as Belotti could still turn out to be a one season wonder.

When you read reports linking Manchester United with an £85 million move to bring in Antoine Griezmann, I know where I’d rather the money spent. Griezmann is a year younger than his Italian counterpart and has been regarded as a much better player for a longer period of time.

Griezmann is not the only option either. Stars such as Robert Lewandowski and Pierre Emerick-Aubameyang could be available for £84 million or less. Both of whom have huge pedigrees when it comes to putting the ball into the back of the net.

I am not trying to take anything away from Belotti, as he’s having an excellent season. I just think there are better options out there, although there is no such thing as a sure bet in football – particularly in the Premier League.