Manchester Clubs to Battle It Out for Alexis Sánchez’s Signature 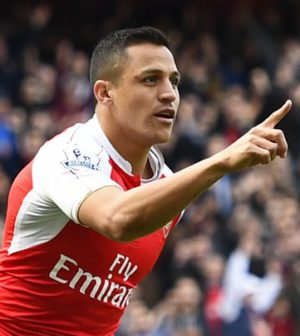 Manchester City and Manchester United will go head-to-head on the field this coming Thursday, in a battle that could eventually determine which one of the Northern powerhouses will finish in the top four. However, reports from the Daily Mirror claim that the pair could be about fight for the signature of one of the Premier League’s top players.

The man in question is Arsenal’s Alexis Sánchez. The 28-year-old still hasn’t put pen to paper on a new contract at the Emirates, and now some of Europe’s elite are beginning to circle; and you can hardly blame them.  The Chilean is about to enter the final 12 months of his current deal in North London.

We’d like to ask the question, which club has the better chance at landing the Chilean if he decides to stay in the Premier League?

First up, let’s assess Manchester City’s chances. Obviously Pep Guardiola will know Alexis Sánchez well from their time together at Barcelona, and he’ll know exactly what the forward would be able to bring to the Manchester City front line. It’s also worth noting that Sánchez will know what would be expected of him from day one, meaning he’d probably slot into the City team much more seamlessly than he would if he made the move to Old Trafford.

In terms of direct competition, I would argue that there is probably a better chance of Alexis Sánchez making the starting line-up on a more regular basis at the Etihad. Outside of Leroy Sané and Raheem Sterling, who are both versatile and can play in pretty much any attacking midfield position, there wouldn’t be much competition for that left-wing role. The Chilean international would be able to make that position his own.

Onto the red half of Manchester. Sánchez and José Mourinho have never worked together at a professional level and it could take the player more time to adapt to his new surroundings. However, we all know what a genius the Portuguese coach is when it comes to the Premier League.

Another factor is the huge amount of attacking talent on display at Manchester United. They have Anthony Martial, Marcus Rashford, Juan Mata, Jesse Lingard and Henrikh Mkhitaryan all fighting it out for starts in wide areas. That’s quite clearly a significant increase in terms of the sheer amount of players fighting for a couple of places on the football field, and it could well put Alexis Sánchez off of a move to Old Trafford.

There is absolutely nothing to choose between the clubs when it comes to offering huge wages. In that regard, Sánchez would probably have very similar weekly wages offered to him. I guess it comes down to which manager and players he would prefer to play for and with respectively.

Right now, I’d say City have the advantage. However, that could change – particularly if Manchester United can overhaul their fierce rivals and replace them in the top four.  Should Pep Guardiola not be able to offer Champions League football next season and Mourinho can, that could be a telling factor.