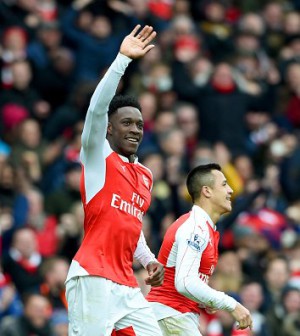 Arsenal will be looking to build on their FA Cup semi-final win on Sunday in a last ditch bid to qualify for next season’s UEFA Champions League when they host Leicester City this evening.

The Gunners are currently in 7th and seven points off fourth place Manchester City, with this being their game in hand.  The Citizens host fifth-place Manchester United on Thursday which plays into the North London club’s hands.

Arsène Wenger guided his side to victory over City in the FA Cup following two wins in their last three Premier League matches.

Here is the side I think we’ll see facing Leicester:

Goalkeeper: Petr Čech
The experienced goalkeeper made a couple of important saves against Manchester City last time out and will maintain his number one spot for this evening’s important game.  Backup David Ospina is also still out with the back injury that has kept him sidelined recently.

Defence: Gabriel Paulista, Laurent Koscielny, Rob Holding
Arsène Wenger continued to go with his 3-4-3 formation at the weekend and as it brought a victory against the odds I don’t see why he won’t stick with it.  Laurent Koscielny is at the heart of the back three, whilst Gabriel Paulista will continue on the right with Shkodran Mustafi still nursing a thigh injury.  Youngster Rob Holding was impressive on Sunday so there’s no reason why he won’t remain in the starting lineup.

Midfield: Héctor Bellerín, Mohamed Elneny, Granit Xhaka, Kieran Gibbs
Having played 120 minutes at Wembley over the weekend and with the North London derby coming up this Sunday I fully expect Wenger to freshen up things in the middle of the park.  This means we could see Mohamed Elneny back in the starting XI, though Francis Coquelin only played a handful of minutes versus Manchester City himself.  Granit Xhaka should partner either player as Aaron Ramsey is set to be rested.  Héctor Bellerín only played 15 minutes in the FA Cup so is fresh to play the right wingback role.  What’s more, the Spaniard came on for Alex Oxlade-Chamberlain after the midfielder picked up a foot injury.  Kieran Gibbs is well-rested to start on the opposite flank with Nacho Monreal having bombed up and down for two hours last weekend.

Attack: Mesut Özil, Danny Welbeck, Alexis Sánchez
Danny Welbeck has looked lively in recent months and should get the nod ahead of Olivier Giroud who was largely ineffective last time out.  There’s no reason why Alexis Sánchez  won’t start and the pair should be supported by Mesut Özil making p the front three.

Here is the Arsenal team on paper: 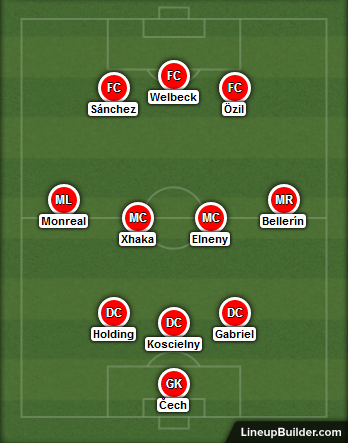