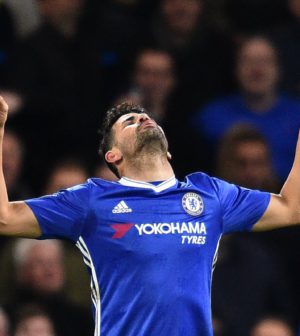 Chelsea have one hand on the Premier League trophy following their 4-2 victory over Southampton at Stamford Bridge this evening that gives them a seven-point lead at the top of the table.

Eden Hazard and Gary Cahill scored either side of Oriol Romeu’s equaliser in the first half before Diego Costa added a brace after half-time.

César Azpilicueta 6 – The home side were generally comfortable at the back with the second goal conceded being little more than a consolation.

David Luiz 7 – Was pretty solid, especially when Southampton had a good spell of possession before equalising in the first half.

Gary Cahill 8 – Brave header to restore Chelsea’s lead on the stroke of half-time which proved to be enough to earn a valuable three points that should be enough to bring the Premier League trophy back to West London in a few weeks’ time.

Victor Moses 6 – Offered width down the right wing but very few significant moments in the final third.  Broke play up around the half way line on a couple of occasions.

N’Golo Kanté 7 – Was more involved in attacks than he was in defence.  N’Golo Kanté picked up his 10th yellow card of the season, fired in an effort on goal, made one excellent run into the penalty area and created a couple of chances in another busy midfield display.

Nemanja Matić 6 – Played a simple passing game, fired two long-range efforts off target and not a whole lot of defensive work to do.

Cesc Fàbregas 7 – Looked after the ball well in an attacking midfield role and set up Chelsea’s final goal.

Eden Hazard 9 – Opened the scoring, was a constant threat, created several chances for teammates in another unplayable performance from the Belgian superstar.

Diego Costa 9 – Ended a run of five games without a goal with a brace in the second half to ensure that Chelsea picked up a valuable three points in their title bid.

Pedro (14 mins) N/A – The Spaniard came off the bench to set up the third goal to prevent any late nerves.

John Terry (6 mins) N/A – A late run out for the experienced Chelsea star.

Willian (1 min) N/A – The Brazilian was brought on so Eden Hazard could get a standing ovation before the final whistle.