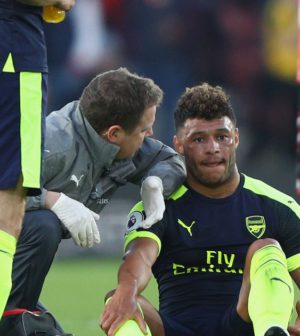 Arsenal have been handed another injury blow this evening as wingback Alex Oxlade-Chamberlain was taken off in the first half at Southampton.

The England international lasted 36 minutes before being replaced by Héctor Bellerín with the scoreline 0-0.

Oxlade-Chamberlain had been enjoying a good spell in the first team following Arsène Wenger’s recent decision to switch to a back three.

According to the BBC, it is believed that Alex Oxlade-Chamberlain has suffered a hamstring injury.

The 23-year-old was making his 16th Premier League start of the season and has made a further 13 appearances from the bench.  It has also been his most productive, having recorded seven assists – more than his previous three seasons combined, as well as scoring twice in the top flight.

This injury could rule Oxlade-Chamberlain out of the FA Cup final versus Chelsea at the end of the month.  After this evening the Gunners have three remaining Premier League games left this season – away to Stoke this weekend before hosting Sunderland and Everton.