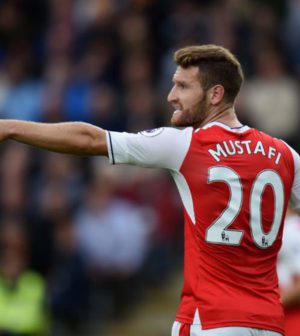 Arsenal face Chelsea in this season’s FA Cup final on Saturday which many believe will be Arsène Wenger’s final game in charge of the Gunners.

After the North London club finished outside of the top four and failed to qualify for the UEFA Champions League for the first time in two decades under the French manager, the odds were already stacked against them ahead of their trip to Wembley to face the runaway Premier League leaders.

On top of that, the Blues were handed a boost on Sunday when Laurent Koscielny was sent off in Arsenal’s final game of the season, a 3-1 win over Everton.  However, replays do suggest that the Gunners captain could have the suspension overturned on appeal.

During the game, Wenger also lost centre-back Gabriel Paulista to a knee injury which is expected to keep the Brazilian out of the FA Cup final and a while longer.

To make matters worse, centre-back Shkodran Mustafi may also miss the final with a head injury now.  The German defender suffered the injury last Tuesday in the 2-0 win over Sunderland and missed yesterday’s win over Everton as a result.

Whilst Mustafi was initially expected to be back to face Chelsea, a report on the BBC today states that the injury could be worse than initially feared.

Should Koscielny’s suspension not be overturned, and Mustafi joins Gabriel on the injured list then the Arsenal defence can be expected to leak goals against the likes of Diego Costa, Eden Hazard and Pedro on Saturday.

Antonio Conte won the Premier League with 93 points in his debut season at Stamford Bridge and could be set to do the double provided his side live up to expectations this coming weekend.