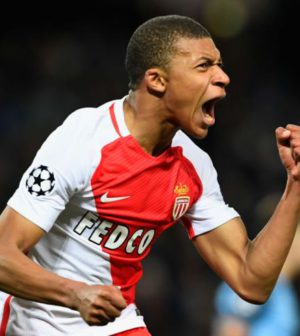 A report in French newspaper L’Equipe Sport tonight has made a sensational claim that Arsenal have put in an offer of £87 million (€100m) for AS Monaco striker Kylian Mbappé.

This news comes just days after Gunners boss Arsène Wenger signed a new two-year contract at the Emirates and proclaimed they would challenge for the Premier League title next season.

Arsenal fans had been calling for Wenger to sign a top striker last summer, and despite being strongly linked with a move for Lyon striker Alexandre Lacazette, they ended up with Lucas Pérez from Deportivo La Coruña.  The Spaniard managed only two Premier League starts this past season, scoring once.

Should tonight’s news be true, Arsenal fans have every reason to be excited with Wenger’s intentions. Mbappé became the first player in history to score in each of his first four UEFA Champions League knockout games and scored 15 goals in 29 French Ligue 1 appearances (17 starts) as Monaco surprisingly won the title.

However, the teenage sensation has also been linked with moves to Real Madrid and Manchester City among other top European clubs in recent weeks.

Arsenal will have a difficult time persuading Mbappé to move to North London, particularly with no Champions League action next season.

Whilst the Monaco striker only established himself this past season, Kylian Mbappé looks like the real deal – composed in front of goal and is a fine finisher. He also possesses great pace and positional sense.