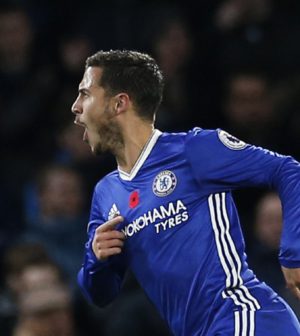 The Belgian international is coming off a season where he scored 16 goals in 36 Premier League appearances to help the Blues to their sixth top flight title in England, during Antonio Conte’s debut season at Stamford Bridge.

Hazard is regarded as one of the top footballers in the world right now after another excellent season that saw him only miss out on the PFA Player of the Year award to teammate N’Golo Kanté.

Real Madrid have a reputation for being able to sign almost any player in the world – with Barcelona usually the only team capable of stopping them.  Even then, the Catalan club were forced into selling Luís Figo to their rivals back in 2000.  In the past they have tempted both Ruud van Nistelrooy and Cristiano Ronaldo to leave giants Manchester United to come to the Spanish capital.

The Chelsea player has even admitted he would be interested in a switch to the Santiago Bernabéu Stadium if Real Madrid were interested.  Hazard is quoted by Four Four Two magazine as saying:

“Of course, I would consider it if Madrid made an offer.”

However, Chelsea fans have little to fear at the moment – there are no reports suggesting that Zinedine Zidane is set to make an approach for the former-Lille forward.  As well as that, Hazard went on to say that he is enjoying his time at Chelsea:

“I only know that I still have a contract with Chelsea for three seasons and that we just had an amazing 2016-17 campaign. We want to continue on this path and want to build on this in the Champions League.

“I am feeling very well at Chelsea. But you never know what will happen.

“I have not met with the board yet to discuss a new deal. I have two games with Belgium coming up first and I am off on my holiday after that. I want to think about football as little as possible.”

It means the 2016-17 La Liga champions have now lifted Europe’s most sought after trophy in three of the past four seasons as they look to dominate to Europe.

Chelsea may have a problem on their hands should Real Madrid come calling for Eden Hazard, but where the forward would fit into their formation remains to be seen.  Predominately a left forward, Hazard would be competing with Cristiano Ronaldo and that simply isn’t going to happen.  Zidane has a choice of Isco and Gareth Bale on the right wing in his 4-3-3 formation, with Karim Benzema or Álvaro Morata as the striker.