Zlatan Ibrahimović Will Recuperate with Man Utd Beyond 30 June 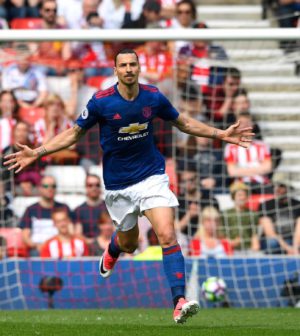 Zlatan Ibrahimović will stay with Manchester United beyond the expiration of his contract on 30 June as the Swede is set to continue his rehabilitation with the Red Devils.

United have opted not to offer the 35-year-old a new contract after undergoing surgery after suffering cruciate ligament damage in a knee towards the end of last season that is expected to keep the footballing legend out of action until the New Year.

The Manchester Evening News are now reporting that Ibrahimović will recuperate at Manchester United at their Carrington training headquarters until he is fully recovered.

It is possible that if Zlatan Ibrahimović successfully recovers from his serious knee injury that he could be offered a new contract to the end of next season.

Having joined United on a one-year deal last summer after his contract expired at Paris Saint-Germain, Ibrahimović scored 28 goals in all competitions during his first season in England as José Mourinho’s side won the Community Shield, EFL Cup and UEFA Europa League.

The Portuguese manager is left with Marcus Rashford and Anthony Martial as options up front next season, but if Richard Keys’ information is accurate, Manchester United could land Real Madrid striker Álvaro Morata in a €70 million (£62m) deal this summer.

Keys Tweeted the following on Saturday:

Morata deal done. The fee is €70m and he'll sign a 4-year deal at Old Trafford.

The 24-year-old has had limited runs in the first team during his spells at Real Madrid and Juventus but the Spanish international certainly looks capable of being a regular goalscorer at any club if given the opportunity.

Morata was Real Madrid’s second top scorer this past season despite only being handed 14 starts in La Liga with head coach Zinedine Zidane often preferring fellow countryman Karim Benzema as the central striker in his 4-3-3 formation.