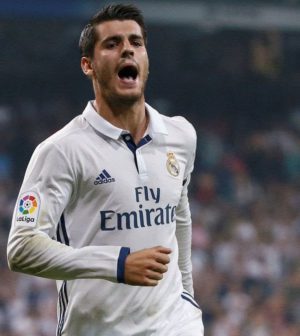 Manchester United could complete the signing of Álvaro Morata from Real Madrid for £65 million as early as next week, according to reports.

The Spanish striker has been José Mourinho’s top summer transfer target with many outlets reporting the Premier League giants have made offers of various amounts since the end of this past season, after missing out on Antoine Griezmann.

United have been left without an experienced striker following a serious knee injury to Zlatan Ibrahimović in their UEFA Europa League quarter-final second leg win over Anderlecht back in April.  Their 2016-17 top scorer is not due back until the start of the New Year and his contract actually expires at the end of this month.

The Mirror are now quoting sources in Spain that suggest Álvaro Morata could undergo a medical with Manchester United as early as this weekend and that a deal could be confirmed as early as Monday.

Morata scored 20 goals in all competitions for the La Liga and Champions League winners but his lack of first-team opportunities have seek him request a move from the Santiago Bernabéu Stadium this summer.  Real Madrid manager Zinedine Zidane has preferred to go with fellow countryman Karim Benzema as the central striker in his 4-3-3 formation.  Morata only made 14 La Liga starts last season.

Current United boss José Mourinho handed Morata has Real Madrid debut back in 2010 after coming through the youth ranks in the Spanish capital.  The 24-year-old failed to hold down a regular first team spot before transferring to Juventus in 2014.  During two seasons with the Italian giants he won the Serie A title on both occasions and scored a consolation goal in the 2015 Champions League final defeat to Barcelona.

Real Madrid then activated their buy-back clause on the striker last summer and Morata proved to be an important squad player.

The loss of Zlatan Ibrahimović appears to suggest that Mourinho can guarantee Morata regular first-team football at Old Trafford with the Portuguese coach using both Marcus Rashford and Anthony Martial as left wingers often over the past season, though they are both naturally strikers.

The report in the Mirror suggests that Manchester United are prepared to splash out £65 million on the striker who has been capped 20 times by the Spanish national team, scoring nine goals.