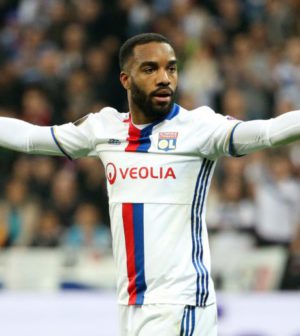 Arsenal will need to pay €55 million (£48.7m) plus €12 million (£10.6m) in add-ons if they want to sign Lyon’s Alexandre Lacazette this summer, the Telegraph are reporting.

The Premier League giants have been in talks with Lyon over a move for the striker with the Gunners having been chasing the 26-year-old since last summer.

Arsenal are expected to spend big money this summer after Arsène Wenger signed a new two-year contract after beating Chelsea in the FA Cup final last month and then voweing to challenge for next season’s Premier League title.

Wenger looks unlikely to sign main target Kylian Mbappé this summer.  AS Monaco have already rejected a reported £88.5 million offer from the North London club for the 18-year-old.

Having missed out on Lacazette last summer, Wenger signed Lucas Pérez from Deportivo La Coruña for a reported £17.1 million.  The Spaniard made only two Premier League starts this past season, and including a further nine substitute appearances, only played a total of 265 minutes in the top flight, scoring just once.

Lacazette scored 28 goals in 30 Ligue 1 appearances for Lyon this past season and netted one goal in four appearances in the UEFA Champions League.  He has amassed an incredible 76 goals in 97 league appearances over the past three seasons.

As well as being an excellent finisher, Lacazette is capable from scoring outside the box, offers pace to get beyond the last defender, and is a good dribbler on the ball.

Arsenals fans have been calling out for Wenger to upgrade on Olivier Giroud up front, whilst Danny Welbeck has been constantly plagued with injuries during his time at the Emirates.

Saed Kolasinac has been Arsenal’s only signing so far this summer with the Bosnia and Herzegovina international arriving on a free transfer from Schalke 04.