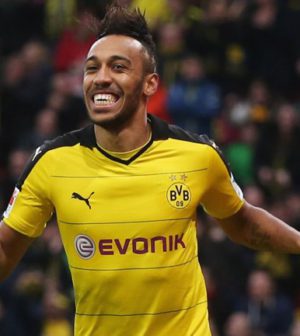 Sky Sports understand that Pep Guardiola’s side are monitoring the situation with the manager believed to be a keen admirer of the Gabon international.

Aubameyang scored 40 goals in all competitions for Borussia Dortmund last season; 31 in 32 Bundesliga appearances, seven in nine UEFA Champions League matches and two goals in three appearances in the DFB Pokal, including the winner in the final.

However, Manchester City already have Gabriel Jesus and Sergio Agüero as options up front with young talent Kelechi Iheanacho an alternative.  It would be interesting to see what plans Guardiola would have for Aubameyang and his current strikers.

Jesus only arrived at the Etihad in January but put in a number of impressive performances either side of an injury that saw the Brazilian make only 10 Premier League appearances (8 starts) this past season.  That was sufficient time for the 20-year-old to net seven goals and provide four assists.

This has alerted the likes of Manchester City who are expected to have a busy summer transfer window after failing to sustain a serious title challenge during Pep Guardiola’s first season in charge.  The Citizens have already splashed out £34 million on Benfica goalkeeper Ederson and £42.5 million on Portuguese playmaker Bernardo Silva from AS Monaco.

Sky Sports report that Liverpool will not make an offer for Aubameyang despite manager Jürgen Klopp bringing him to Germany from Saint-Étienne in 2013.  The 28-year-old has gone on to score a mightily impressive 85 goals in 128 Bundesliga appearances since.  However, the only major honour he has was this past season’s German Cup.

Aubameyang is one of the quickest players in world football and is an excellent finisher too.  He is widely regarded as one of the top striker’s in the game currently so don’t be surprised if Manchester City face a lot of competition for the star’s signature.