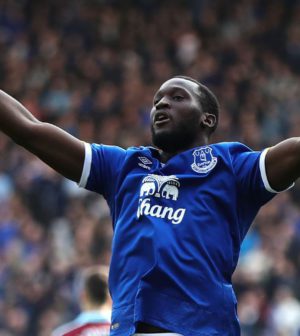 The striker has been linked with a move to the Premier League champions all summer, with the rumours intensifying ever since current striker Diego Costa claimed that he was no longer in the manager’s plans earlier this month.

Romelu Lukaku has been on fire ever since he left Stamford Bridge, initially on a one-year loan at Goodison Park before the deal was made permanent in 2014 for a club record £28 million at the time.

The Belgium international saw limited opportunities in West London after arriving in 2011 and was loaned out to fellow Premier League side West Bromwich Albion for the 2012-13 season where he scored 17 goals in 35 Premier League appearances, including a hat-trick as a substitute in Sir Alex Ferguson’s final game.

Chelsea currently have Costa and Michy Batshuayi on their books whilst youngster Tammy Abraham will be hoping to break into the first-team in the near future.

However, it appears that Antonio Conte wants to add another proven goalscorer to his books by re-signing Lukaku.  The 24-year-old has scored an impressive 53 goals in 110 Premier League appearances since his permanent move to Everton, and scored 15 in 31 games during his loan spell.

The London Evening Standard are reporting that Lukaku could be the first of six summer signings made by Conte, with AS Monaco’s Tiemoué Bakayoko expected to come in and partner N’Golo Kanté in the centre of midfield next season and goalkeeper Willy Caballero to join as backup to Thibaut Courtois after being released by Manchester City.

Conte is also believed to want another centre-back following the release of John Terry.  Southampton’s Virgil van Dijk and Juventus’ Leonardo Boucci have both been linked.

Romelu Lukaku is a good target man as the loan striker with a lethal left foot and is good in the air.  With the likes of Eden Hazard, Willian and Cesc Fàbregas around him you could certainly expect him to challenge for the Premier League Golden Boot in the Blues’ first team.