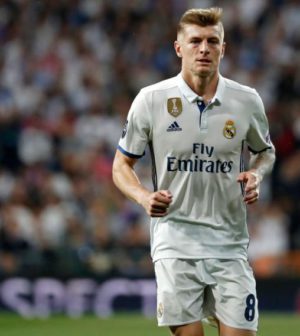 It is common knowledge that Real Madrid are very interested in signing David de Gea from Manchester United and have been for the past two years. Many ,including myself, thought they had landed their target in the summer of 2015, but for an issue with a fax machine (or so the two clubs led us to believe), the player remains at Old Trafford.

However, if a report by Don Balon is anything to go by, the Red Devils are now ready to let the Spaniard leave Old Trafford for the Santiago Bernabéu. The Spanish outlet claim that Manchester United are proposing a swap deal to Real Madrid that would see Toni Kroos move to the Premier League giants and David de Gea move the other way.

Although swap deals aren’t so common these days, it would not be a huge surprise if Real Madrid let Kroos go in order to sign de Gea. United boss José Mourinho could also be using this tactic to inform Real Madrid that his number one goalkeeper will not be allowed to leave the Theatre of Dreams once again this summer.

The Spaniard is by far Manchester United’s most important player and it would be a very risky move to let him go, even if the signing of Kroos would will be great for them. United don’t currently have a midfielder as good as the 2014 World Cup winner and the centre of the park is one position they could do with bolstering at the moment.

Whilst United have quite a few central midfielders, should Kroos be available, I would be surprised if Mourinho didn’t make a move for him, especially as it was they who were first linked with the signing of Toni Kroos before Real Madrid signed him. Kroos had been Old Trafford-bound before the lure of Real Madrid was too much to turn down and he chose Los Blancos instead.

Aside from Manchester United, Bayern Munich could also become interested in their former player.  Although the Bavarians have Thiago Alcântara, Arturo Vidal and Renato Sanches, these players aren’t quite Toni Kroos. A return to his homeland may also be tempting for the 27-year-old.