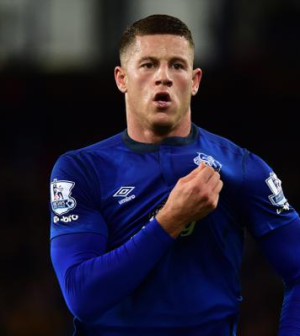 A look at Manchester United’s midfield will show you the club is well stocked in the centre of the park. However, having sold Morgan Schneiderlin in January, the Red Devils do not really have an out-and-out defensive-minded midfielder.

Ander Herrera, Paul Pogba, Michael Carrick and Marouane Fellaini are all more attack-minded players, hence it was not surprising when Manchester United were linked with the signing of Nemanja Matić from Chelsea earlier this summer. Signing Matić would be a great move for José Mourinho’s side. The manager knows how to get the best out of him having previously worked together at Stamford Bridge.

It’s not know whether Manchester United are still on the case for the Serbian midfielder but another name has entered the fray. The Daily Mail claim the Premier League giants and Chelsea are two of the clubs who are keenly monitoring the situation of Everton contract rebel Ross Barkley. The England international has only one year left on his contract with Everton and has refused to sign a new deal so far. As a result he has been the subject of intense media speculation of late.

According to the report in the Daily Mail, United will have to pay as much as £50 million if they want to sign Barkley this summer. This fee seems crazy considering he has only 12 months left on his deal, is a very inconsistent player and can begin to negotiate a free transfer move as early as January. Though being a home grown player, he is expected to come with a high transfer fee, but even still, Barkley is not a £50 million player in my book.

Everton could yet lower their demand when we head towards the business end of the transfer window, but should United want to sign him, they may need to move promptly as Tottenham Hotspur have also been reported to be very interested in the midfielder. However, having said that, I think Mourinho and United will be better served by signing Matić from Chelsea.

The Serbian is the type of player they need at the moment, not Barkley.