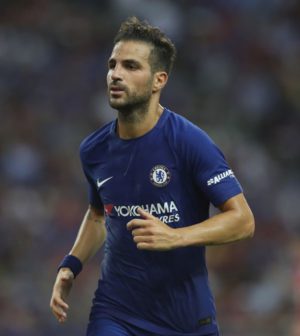 Chelsea will be looking for revenge in Sunday’s FA Community Shield having lost the FA Cup final to Arsenal back in May.

Despite some reports stating that Chelsea are failing to sign Antonio Conte’s targets the Italian manager had more than £120 million worth of talent added to his squad this summer with the signings of Álvaro Morata, Tiemoué Bakayoko and Antonio Rüdiger.

Arsenal have a few injuries and fitness concerns heading to the trip to Wembley tomorrow but the Blues have their own injury concerns with both Eden Hazard and Bakayoko sidelined, whilst Morata isn’t guaranteed to start having had a lack of playing time pre-season.

Goalkeeper: Thibaut Courtois
Willy Caballero was merely signed as a replacement to Asmir Begović as Thibaut Courtois will remain Chelsea’s number one for this campaign and should start Sunday’s game.

Defence: César Azpilicueta, David Luiz, Gary Cahill
It will be interesting to see what plans Antonio Conte has for Antonio Rüdiger but for the time being I think we’ll see the German youngster play backup to the trio that performed so well last season.  Chelsea no longer have either John Terry or Kurt Zouma to sit on the bench.

Midfield: Victor Moses, Cesc Fàbregas, N’Golo Kanté, Marcos Alonso
many expected Victor Moses to lose his place as the right wingback heading into the new season but the Nigerian international looks set to retain his role as far as the summer transfer activity suggests.  Marcos Alonso was a good attacking threat down the left last season and there’s no reason why the Spaniard won’t keep his spot.  With Bakayoko injured and Nemanja Matić departing to Manchester United, Cesc Fàbregas should face his former club alongside N’Golo Kanté.

Attack: Willian, Pedro; Michy Batshuayi
Willian and Pedro usually compete with one another for the starting role on the right of Chelsea’s attack but Eden Hazard’s injury means the Spaniard will replace him on the left.  With Diego Costa out-of-favour and Álvaro Morata potentially lacking match fitness, Michy Batshuayi should be given a rare start.

Here’s the Chelsea team on paper: 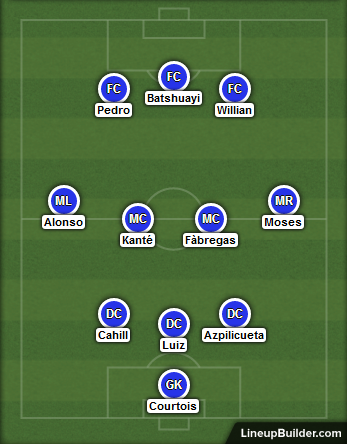