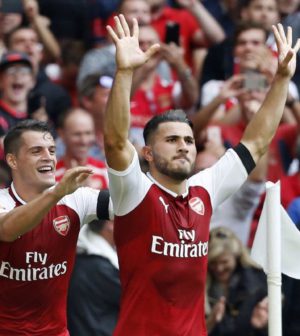 Arsenal host the first Premier League game of the 2017-18 season when they take on Leicester City at the Emirates Stadium on Friday night.

Arsène Wenger signed a new two-year contract over the summer and vowed to challenge for this season’s title.  He has so far only added two names to his squad – Alexandre Lacazette and Sead Kolašinac – both of whom made their debuts in the FA Community Shield victory over Chelsea last weekend.

Leicester City have been busier so far in the transfer window with the arrivals of Harry Maguire, Vicente Iborra, Eldin Jakupović and Kelechi Iheanacho.

Here is the Arsenal team I think we’ll see taking on the Foxes:

Goalkeeper: Petr Čech
The 35-year-old remains Arsenal’s first choice ahead of David Ospina and will start Friday’s Premier League opener.  Petr Čech will be looking to extend his Premier League record for number of clean sheets throughout the season.

Defence: Rob Holding, Per Mertesacker, Nacho Monreal
Laurent Koscielny is suspended following his red card versus Everton on the final game of last season and Gabriel Paulista is sidelined with a knee ligament injury so we should see the same back three that started both the successful FA Cup final and Community Shield.  This means Per Mertesacker in the middle with Rob Holding and Nacho Monreal supporting him.

Midfield: Alex Oxlade-Chamberlain, Aaron Ramsey, Granit Xhaka, Sead Kolašinac
Sead Kolašinac can expect to make his full debut for Arsenal this weekend after coming off the bench to score their equaliser in last Sunday’s Community Shield at Wembley.  This would see Alex Oxlade-Chamberlain move from left wingback to the right flank where he looked very good at the end of last season.  Héctor Bellerín drops to the bench.  Aaron Ramsey should be back to partner Granit Xhaka in centre midfield, especially with Santi Cazorla and Jack Wilshere both sidelined.  Otherwise Wenger has Mohamed Elneny as an option here.

Attack: Danny Welbeck, Mesut Özil; Alexandre Lacazette
Alexis Sánchez has been ruled out of the first game of the season with an abdominal injury.  Mesut Özil is expected to have recovered from the ankle injury that kept him out of the Community Shield to partner wither Danny Welbeck or Alex Iwobi.  I think he’ll go with the former as the England international offers more of a goal threat.  They will support Alexandre Lacazette with the Gunners’ record transfer signing set to replace Olivier Giroud as their number one striker this season.

This is how I think Arsenal will line up: 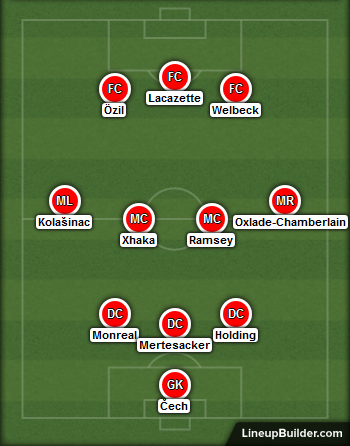