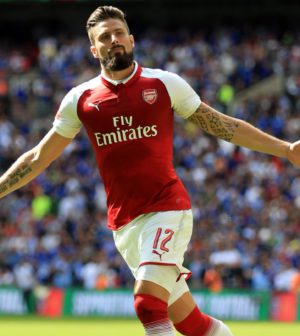 Arsenal scored twice in the final 10 minutes to win a thrilling match to start the 2017-18 Premier League season.

The Gunners took the lead inside two minutes when Alexandre Lacazette headed home on his league debut.  Some poor defending saw Arsenal go from in front to behind before the half hour mark – first Shinji Okazaki was able to head home from close range before Jamie Vardy was gifted a tap in after Granit Xhaka conceded possession deep in his own half.

Danny Welbeck scored a tap-in of his own in first half stoppage time to level the scores but Arsenal found themselves behind on 56 minutes when Vardy was gifted a free header inside the six-yard box from a corner.

Arsène Wenger rolled the dice on 67 minutes with the introductions of Aaron Ramsey and Olivier Giroud.  The duo scored the goals that won Arsenal the game – Giroud showing great strength to fight off Harry Maguire to head home off the underside of the bar from a corner.

Petr Čech 5 – Caught in no man’s land for the first and third goals as Petr Čech and the Arsenal defence looked hopeless at dealing with set pieces and crosses.  Didn’t have a chance with Leicester’s second.

Rob Holding 4 – Never looked comfortable and Arsenal didn’t concede again after Rob Holding was replaced midway through the second half.

Nacho Monreal 4 – Thrown into a tough spot as he’s not a centre-back and had to guide a youngster to his right and debutant to his left.  Troubled by Jamie Vardy every time Leicester came forward, didn’t get close to the striker on Leicester’s third goal.

Sead Kolašinac 5- Left his position at the back post to allow Leicester to equalise.  Looked better going forward than defending as shown by setting up Danny Welbeck’s equaliser when he was beyond the Leicester defence.

Héctor Bellerín 5 – Left plenty of space at the back and his crossing when in good positions was poor as per usual.  Looked a better attacking threat when switched to the left.

Mohamed Elneny 7 – Cracking ball for the opening goal and made some good passes before being replaced midway through the second half.

Granit Xhaka 6 – Gifted Marc Albrighton possession deep in Arsenal’s half from which his cross gifted Jamie Vardy to put Leicester in front.  Nice pass to set up Aaron Ramsey’s equaliser after creating a number of chances for his teammates.

Alex Oxlade-Chamberlain 6 -Too keen to shoot from outside the penalty area when the chances were just not on.  Some poor passes in the final third too but defensively Riyad Mahrez was kept quiet.

Mesut Özil 7 – Reportedly not fully recovered from his recent ankle injury and didn’t create too many chances but retained possession well.

Danny Welbeck 8 – Some good movement from the forward who got himself into two good goalscoring positions before he scored his goal.

Anthony Lacazette 8 – Dream start by scoring with a fine header inside two minutes.  Harry Maguire kept him in check for much of the game thereafter.  Put on the left wing for the final 20 minutes following the introductions of Aaron Ramsey and Olivier Giroud; from there he put a few balls into the box  Anthony Lacazette’s determination helped win the ball inside the Leicester penalty area from which Danny Welbeck equalised in first half stoppage time.  A very good, hardworking display but just didn’t get a great deal of supply.

Aaron Ramsey (23 mins) N/A – Picked up a good position in the penalty area immediately after being introduced but headed wide.  Equalised in the final eight minutes after great control of Granit Xhaka’s chipped ball before finishing finely past Kasper Schmeichel.

Theo Walcott (15 mins) N/A – Although Arsenal were losing when Theo Walcott came on he didn’t have much of an impact in the turnaround at all.