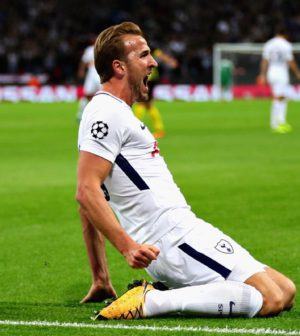 It is perhaps unjust that Harry Kane could only celebrate his 100th goal for Tottenham in front of a silent Goodison Park, as opposed to a raucous White Hart Lane prior to its closure. That dream scenario may have been realised had Kane become a first team regular at Tottenham sooner than the 2014-15 season. So too would it have been the case if Mauricio Pochettino had arrived at the club before he did. Presently though, that minor gripe will be the furthest thing from Kane’s mind.

With his traditional ‘Drygust’ behind him, England’s greatest hope for next summer’s World Cup netted two goals against an abysmal Everton side on a ground which was a veritable fortress last season, and looked his usual unplayable self. Tottenham fans can also take satisfaction from the fact that it has taken their star striker just 169 games to reach his century, which is twelve less than Arsenal legend Thierry Henry. Kane’s surge over the past three years has also provided justification for arguments that he can knock Alan Shearer off his perch as the Premier League’s all-time top scorer.

Mirroring Tottenham’s present upward trajectory, Newcastle United qualified for the UEFA Champions League in consecutive seasons after Sir Bobby Robson’s first full season in charge (2000-01) had ended in a bottom half finish for the Magpies. However, Geordies and neutrals alike will always wonder just how much more effective Shearer could have been, had the failed projects of his predecessors Kenny Dalglish and Ruud Gullit been bypassed.

On arriving at St James Park in 1996, on the back of Newcastle’s title near-miss, Shearer’s scoring prowess enabled another second place finish for Newcastle. However, Kevin Keegan’s departure in January 1997 coincided with a downturn in fortunes for ‘the Toon’. While Shearer continued to deliver the goods for his boyhood club, there is the ever-present feeling that he could have far outstripped his final total of 260 Premier League goals.

Provided that Pochettino’s head is not turned by a more lucrative offer from the likes of Paris Saint-Germain, Kane is unlikely to face the same disruption Shearer did at Newcastle in the late 1990s. This is reflected by the sustained optimism surrounding Tottenham’s title chances, with the Lilywhites priced (at https://www.sunbets.co.uk/sports/betting/Football) at just 10/1 to win the title.

The pressure is on

While Kane’s ability is sufficient for him to be considered a threat to Shearer’s record, the absence of a strike partner in leaner periods of form (i.e: the opening month of every season) may affect his chances of hitting his target. Over the past fifteen years, since Newcastle’s last dalliance with the Champions League, notable strike partnerships have become increasingly sparse. Much of this can be attributed to the ever-growing influx of the finest and most athletic wide players from the continent.

Said influx has undoubtedly changed the dynamic of the English game, but in the years before it began gaining pace, Shearer enjoyed highly productive partnerships with some of the most feared talents of the day. Such talents included Chris Sutton, with whom Shearer formed the famous ‘SAS’ during Blackburn Rovers’ title-winning campaign of 1994-95, and Craig Bellamy, when Newcastle finished third in 2002-03. For Kane, however, there is nobody with whom to share the plaudits in the final third. While this may be a less-than-ideal scenario at times, Kane’s rapport with his teammates appears to be nigh-unmatched by the main strikers at the other clubs that are currently in realistic title contention.

If it ain’t broke…

Tottenham fans will do well to note that it only took Alan Shearer around nine-and-a-half-years to become the Premier League’s top gun, and 14 years to reach his final total of 260. As such, nobody is under any illusions as to how much of task Kane faces in attempting to break Shearer’s record. Yet, at 24, Kane has another eight years of good football in him at the very least.

Tellingly, Kane has already netted 80 goals in the world’s ‘toughest’ league, since making that aforementioned breakthrough into the first team just three years ago. Assuming that he is lucky to avoid long term injury throughout his peak years, Kane is on course to finish his career with around 320 Premier League goals. That record would, in all likelihood, stand for generations to come – provided that the mercurial Kane is consistent enough, and fortunate enough, to achieve it.

Tamhas Woods is a BJTC-accredited sports journalist with a Masters in Journalism from Staffordshire University.