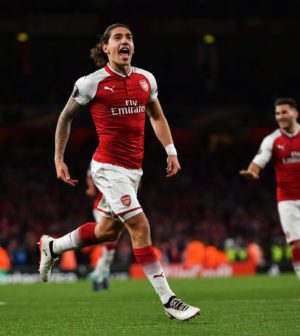 Arsenal came from a goal down at half-time to comfortably win their opening 2017-18 UEFA Europa League game against Bundesliga strugglers FC Köln this evening.

Jhon Córdoba caught David Ospina outside his penalty area to give the visitors a shock early lead in a first half where the Gunners looked off the pace.

A half-time team talk from Arsène Wenger did the trick as substitute Sead Kolašinac scored a fine volley inside the opening five minutes of the restart before taunting the Köln fans.

Arsenal were well on top before Alexis Sánchez scored a superb solo effort midway through the second half to give the Premier League side the lead.  Héctor Bellerín ensured the Gunners started with three points 10 minutes from time when he rolled home a rebound after Theo Walcott had been denied by Timo Horn.

Rob Holding 5 – Looked shaky at the back once again for the Gunners.  Replaced by Sead Kolašinac at the start of the second half which proved to be a match-winning substitution from Wenger.

Nacho Monreal 5 – Caught out of position a few times in both a back three and a back four this evening.

Héctor Bellerín 7 – A poor first half showing from the right wingback but Héctor Bellerín was good in both defence and attack after the break.  Scored the goal to settle any nerves Arsenal fans had going into the final 10 minutes.

Mohamed Elneny 7 – Looked after the ball well in midfield without much ambition.

Alex Iwobi 5 – Lacked match fitness and played in a more defensive role than he is used to.

Theo Walcott 5 – A number of poor first touches from Theo Walcott matched with some poorly-timed runs that saw him caught offside a number of times.

Alexis Sánchez 8 – An excellent solo effort that gave Arsenal the lead.  Alexis Sánchez had a quiet, frustrating first half but proved to be a key player in turning the game around.

Olivier Giroud 6 – Teammates didn’t give Olivier Giroud much to feed off but the French striker had an adequate game given the circumstances.

Sead Kolašinac (45 mins) N/A – A cracking volley to level the score immediately after being introduced.  Was excellent driving forward and was arguably Arsenal’s best player despite only playing for 45 minutes.

Reiss Nelson (9 mins) N/A – A late introduction for the the highly-rated teenager.