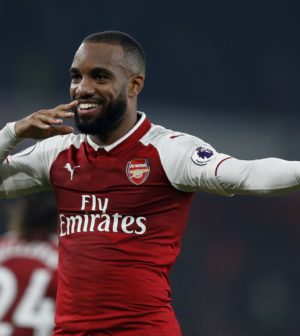 Arsenal moved up to seventh in the Premier League table with a 2-0 victory over West Bromwich Albion at the Emirates this evening.

Tony Pulis’ side really tested the Arsenal backline in the first half with Jay Rodriguez striking the post and having two efforts cleared off the line either side of Alexandre Lacazette giving the hosts the lead.

The French striker doubled the Gunners’ lead midway through the second half from the penalty spot after Aaron Ramsey was barged over by Allan Nyom.  Arsenal dominated the second half.

Petr Čech 8 – Made an excellent save to deny Jay Rodriguez at 0-0 following a clumsy challenge from Shkodran Mustafi.  Petr Čech later denied the same player from very close range on the stroke of half-time.

Shokdran Mustafi 7 – Fortunate not to concede a penalty early on as he brought down Jay Rodriguez inside the penalty area.  Shkodran Mustafi was solid afterwards and even tested Ben Foster with a header from a corner early in the second half.

Laurent Koscielny 8 – A rock at the heart of Arsenal’s defence.  Arsène Wenger’s side had allowed a few chances in the first half but nothing after the break as Laurent Koscielny and co shut up shop.  Tony Pulis threw on more attacking players in the second half but the likes of Salomón Rondón didn’t even have a single effort on goal.

Nacho Monreal 8 – Offered excellent support going forward and seemed to be keen to get among the goals.  This did leave gaps at the back in the first half but conceding a goal after the break was never in doubt.  Nacho Monreal made a fantastic goalline clearance to deny Rodriguez late in the first half.

Héctor Bellerín 8 – Excellent going forward down the right to offer width.  However, Héctor Bellerín did find defenders in the way of his low crosses.  Saw a powerful 20-yard strike deflected over in the final 10 minutes.  Kieran Gibbs was lively down Arsenal’s right for the Baggies though.

Mohamed Elneny 7 – Saw a lot of the ball and looked after it well.  Mohamed Elneny supported the attacks and even created a couple of opportunities.

Granit Xhaka 6 – Sloppy in possession in the first half but was more careful with the ball in the second 45′.  Never managed to pick out a teammate with any of his set piece deliveries though.

Sead Kolašinac 7 – A quiet attacking performance by Sead Kolašinac’s standards at left wingback.  A decent performance none the less as he helped moved the ball around.  Allan Nyom didn’t cause the Bosnian any problems defensively.

Aaron Ramsey 8 – Tireless in closing West Brom down in possession and adventurous in attack, but Aaron Ramsey surprisingly only fired in one effort on goal despite playing alongside Alexis Sánchez in the two central attacking midfield roles.  Did win the penalty from which Alexandre Lacazette finished off the game.

Alexis Sánchez 8 – Another excellent performance from the Chilean superstar who caused West Brom’s defence a number of problems.  It was Alexis Sánchez’s free kick that struck the bar from which Lacazette headed home Arsenal’s opener.  Won a few free kicks, tested Ben Foster and created a few chances too.

Alexandre Lacazette 9 – Showed striker’s instinct to follow in Sánchez’s free kick to head home Arsenal’s opener.  Alexandre Lacazette beat Ben Foster with a powerful penalty into the bottom corner.  Made some good runs on and off the ball and looked keen to score.

Olivier Giroud (8 mins) N/A – A late run out for the French striker but not enough time for him to score off the bench this time.

Mesut Özil (8 mins) N/A – The German playmaker made a late substitute appearance after picking up a slight knock before the Chelsea game last weekend.