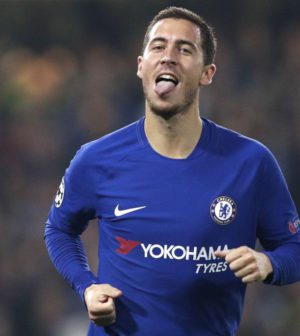 Chelsea maintained their two-point lead at the top of Group C in this season’s UEFA Champions League with a pulsating 3-3 draw against AS Roma at Stamford Bridge.

The Premier League champions were 2-0 on 37 minutes after goals from David Luiz and Eden Hazard before former-Manchester City left-back Aleksandar Kolarov pulled one back before half-time.

Roma turned the game on its head midway through the second half with two goals in the space of seven minutes from another former-Manchester City player, Edin Džeko.  The Bosnian hadn’t scored against Chelsea in nine previous matches but ended that drought with a stunning volley to level the scores.

Five minutes after Džeko had given the visitors the lead Eden Hazard scored his second goal of the game in what would prove to be the end of the drama in West London.

This was without doubt the Champions League game of round three.  Those without Sky should certainly consider using online services to watch live sports streaming in future in order not to miss out on such classic action.

Thibaut Courtois 6 – It was a busy night for the Chelsea goalkeeper who made a number of saves including a very good one to deny Radja Nainggolan from close range in the first half.

Davide Zappacosta 5 – Had a very tough game defensively against Diego Perotti down the wing and was careless in possession on a few occasions himself.  Rarely picked out a teammate with his attempted crosses.

César Azpilicueta 6 – Will be disappointed in his effort to prevent Kolarov’s opening goal but wasn’t disastrous.

Andreas Christensen 6 – Arguably the best of Chelsea’s three centre-backs but there wasn’t much to be proud of in conceding three goals.

Gary Cahill 6 – Won a couple of headers and put up a fight.  Wasn’t the worst performance in the world from Gary Cahill but certainly plenty of room for improvement.

Marcos Alonso 5 – Saw his fair share of the ball but Roma’s high press forced Marcos Alonso into mistakes and poor passes.  Not a threat in the attacking half.

David Luiz 7 – Threw himself around the holding midfield role and scored an excellent goal to open the scoring.  David Luiz is no N’Golo Kanté but he made a contribution, though was reckless at times.

Tiémoué Bakayoko 6 – Worked his way up and down the pitch but never got much time on the ball.  Was wild with his efforts on goal.

Cesc Fàbregas 6 – Roma limited Cesc Fàbregas’ time and space on the ball but the Spaniard was able to create a couple of opportunities for his teammates without making a real impact on the game.

Álvaro Morata 5 – Looked unfit but Antonio Conte may have taken a gamble on Álvaro Morata as an excuse not to play Michy Batshuayi.  The Spaniard never really tested Alisson with any of his efforts.

Pedro (35 mins) N/A – A lively half hour from the Spaniard who set up Chelsea’s equaliser and created a few other chances after coming on for David Luiz.

William (12 mins) N/A – A more defensive player than Eden Hazard whom he replaced, William helped make sure Chelsea didn’t lose the game in the final 10 minutes.