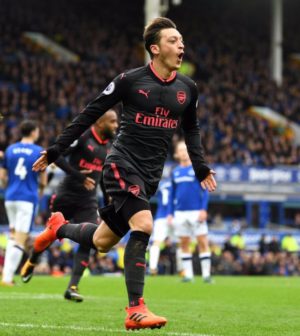 Arsenal came from behind to produce a comfortable 5-2 win at Goodison Park over Everton this afternoon.  The result moves the Gunners up to fifth spot in the Premier League, directly below Chelsea on goal difference.

Wayne Rooney had opened the scoring on nine minutes against the run of play for the hosts moments after Idrissa Gueye had got away with a foul.

Arsène Wenger’s side pummeled Everton throughout the first half but it was not until the 40th minute that they got on level terms with Nacho Monreal’s well-controlled effort after Jordan Pickford had parried Granit Xhaka’s deflected shot into his path.

Mesut Özil and Alexandre Lacazette scored in the second half, either side of Idrissa Gueye’s dismissal for the Toffees, before three goals were scored from the 90th minute onwards. First Aaron Ramsey finally got on the scoresheet in the final minute with a nice finish after Jack Wilshere played him in.  A short backpass from Nacho Monreal gifted Oumar Niasse a tap in with two minutes of stoppage time to go.  And there was still time Alexis Sánchez to score a solo goal in the final moment of the game.

Petr Čech 6 – Didn’t have a chance with Rooney’s opener and had little else to do all afternoon.

Laurent Koscielny 8 – Comfortable afternoon for the French defender who couldn’t do anything about Everton’s goals but didn’t allow them anything else.

Per Mertesacker 8 – Cut out a couple crosses Everton put into the box with good reading of the game.  Did back up from Wayne Rooney for the opening goal in what is the only criticism you could have of Per Mertesacker in an otherwise solid display.

Nacho Monreal 7 – Scored an important equaliser just before half-time in what otherwise could have been a frustrating afternoon for Arsenal.  Nacho Monreal’s short backpass did gift Everton their second goal though but the game was over by then.

Héctor Bellerín 8 – Neither Leighton Baines nor Dominic Calvert-Lewin caused the Spaniard any problems defensively this afternoon.  Héctor Bellerín got forward to help with the attacks.

Aaron Ramsey 9 – Excellent movement from the midfelder today but will be disappointed with his finishing.  Aaron Ramsey got into lots of good scoring positions and had chance after chance in the game, notably ballooning from the penalty spot with plenty of time and space.  Did score in the final minute to his relief.  Everton’s midfield failed to pick him up time and time again.

Granit Xhaka 8 – Caught in possession that led to Everton’s opening goal, though slow motion replays do show Granit Xhaka should have been awarded a free kick.  It was the midfielder’s parried effort that led to Arsenal’s equaliser.  The Swiss international also struck the top of the crossbar in the second half.

Sead Kolašinac 6 – Wasn’t tested at all defensively by Jonjoe Kenny whilst failed to test Jordan Pickford himself with a couple of efforts.  Was sloppy with some of his passing.

Alexis Sánchez 10 – Excellent performance once again from the Chilean who registered both a goal and an assist today.  Constantly ran at the Everton defence and fired in a number of efforts on goal.  Everon’s defence had no answer to Alexis Sánchez.

Mesut Özil 10 – A man of the match performance from Mesut Özil today who gave Arsenal the lead in the second half which they never looked back on.  The German playmaker then set up Alexandre Lacazette’s goal which sealed the game in the final 20 minutes.  Created chance after chance and it was only a lack of execution from teammates that prevented Özil from registering more assists today.

Jack Wilshere (14 mins) N/A – First Premier League appearance of the season and 14 minutes was enough time for Jack Wilshere to set up Aaron Ramsey for a goal.

Francis Coquelin (9 mins) N/A – Came on to give Mesut Özil a standing ovation from the away supporters.  Arsenal did concede a goal versus 10 men with Francis Coquelin on the pitch.