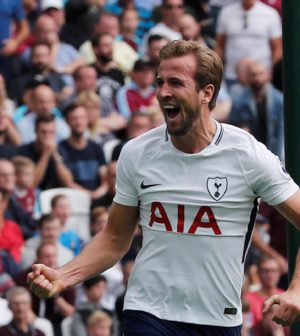 Tottenham Hotspur were emphatic 4-1 winners over Liverpool at Wembley Stadium today after an impressive performance in drawing 1-1 at Real Madrid in the Champions League midweek.

Harry Kane took advantage of some bad Liverpool defending in the opening five minutes to score his first Premier League goal at the national stadium.  Kane then assisted Heung-min Son to make it 2-0 after only 12 minutes.

Liverpool got back into the game when Mohamed Salah scored on 24 minutes and were on top for the next 20 minutes until Dele Alli took advantage of Joël Matip’s poor header in stoppage time to give Tottenham a 3-1 half-time lead.

Kane scored his second goal after Liverpool failed to to clear a free kick just before the hour.

Hugo Lloris 8 – Hesitant on his positioning for Mohamed Salah’s goal which got Liverpool back in the game temporarily.  Hugo Lloris wasn’t next tested until midway through the second half when he made a stunning save to deny Philippe Coutinho.  Denied James Miler and Mohamed Salah from close range with his feet.

Davinson Sánchez 9 – Made a number of clearances and was tidy on the ball.  Aside from Salah’s goal, Liverpool’s only tests of Lloris came after Tottenham had scored their fourth.

Toby Alderweireld 8 – Did a good marking job on Roberto Firmino in what was actually a comfortable afternoon for Toby Alberweireld against a much-hyped Liverpool front three.

Jan Vertonghen 9 – Saw an effort blocked on the line from which Harry Kane wrapped up the game on the follow up.  Did concede possession inside his own half on more than one occasion but did his defensive work well in that Roberto Firmino, Philippe Coutinho and Mohamed Salah saw very few opportunities inside the penalty area.

Kieran Trippier 8 – A simple dink over the top from a throw in saw Kieran Trippier register an assist for the opening goal.  Neither Philippe Coutinho nor Alberto Moreno were much of a threat when out on the left-hand side.

Dele Alli 8 – Either a nice finish or a scuffed finish but Dele Alli’s goal in first-half stoppage time was a killer for Liverpool who had been on top for much of the final 20 minutes of the first half after pulling one back.

Harry Winks 8 – Controlled the game in the middle of the park and with his central midfield partners. Harry Winks didn’t allow James Milner, Emre Can or Jordan Henderson do the same for Liverpool.

Christian Eriksen 7 – Wasn’t directly involved in any of Tottenham’s goals and had a quiet game in terms of touches and creating chances by his standards, but was part of a side that won handsomely.

Serge Aurier 7 – Mohamed Salah did score from down the left wing but otherwise Serge Aurier had a fine game playing out on the left-hand side today.  Potentially it was his pace that Mauricio Pochettino put him up against the Egyptian but turned out Spurs fans had nothing to be nervous about in the end.

Heung-min Son 9 – Some excellent runs off the ball really helped pull the Liverpool defence out of position.  A well-controlled finish to give Spurs a 2-0 lead after only 12 minutes.  Heung-min Son had hit the underside of the bar before mis-kicking an excellent chance not long after.

Harry Kane 10 – Another tremendous outing from Harry Kane who got Tottenham on their way with the opener inside five minutes and setting up Son’s goal before wrapping the game up with Spurs’ fourth in which was only his second shot on target of the game.  The Liverpool defence couldn’t deal with the England international.

Moussa Sissoko (22 mins) N/A – Brought on for Son to help Tottenham see out the game without any nerves.  Did injure himself in making a tackle in the final 10 minutes, but finished the game.

Eric Dier (10 mins) N/A – Left out of the starting lineup today because he felt ill but was well enough to get a 10-minute run out at the end.

Fernando Llorente (8 mins) N/A – Came on for Harry Kane who appeared to have picked up a thigh injury.

Simon Mignolet 2 – Poor positioning for Spurs’ opener inside five minutes.  All over the place from the free kick from which Harry Kane turned home his second.

Joe Gomez 3 – Nothing the youngster could do for the first two goals as he was playing right-back then but Liverpool conceded the other two after Joe Gomez shifted to centre-back.

Joël Matip 2 – Was part of a defence that was all over the place for 90 minutes.  Joël Matip’s poor header set up Dele Alli’s goal in first-half stoppage time.

Dejan Lovren 1 – Needlessly played Harry Kane onside for Tottenham’s opening goal and then misjudged Hugo Lloris’ long throw to gift Kane time and space to set up the home side’s second.  Was all over the shop before being replaced on the half hour mark.  Did block a Kane effort to save himself from scoring a zero with us.

Alberto Moreno 3 – Was beaten by a simple chip over the top for Tottenham’s opener and never really recovered.  Nowhere to be seen for the second goal from which Harry Kane crossed the ball from Alberto Moreno’s side.

Jordan Henderson 5 – Poor in protecting his defence today and couldn’t stop Tottenham from controlling the game.  Did set up Liverpool’s consolation goal.

Emre Can 5 – Saw a lot of the ball but didn’t do much with it.  A couple of poor touches and not much in way of support to his defence.

James Milner 6 – Hardworking game from James Milner who started the game in centre midfield and then moved to right-back.

Mohamed Salah 7 – Scored a scuffed effort that got Liverpool back into the game for 20 minutes.  Missed a decent chance at 1-4.

Roberto Firmino 4 – Almost anonymous up front; Robert Firmino didn’t have a single effort on goal all game.  Was also poor when he did receive possession.  Cleared an effort off the line was the only moment of note from the Brazilian.

Philippe Coutinho 5 – Forced an excellent save out of Hugo Lloris in the second half but it was an otherwise ineffective day for Philippe Coutinho who did see a lot of the ball but was often coming back deep to collect it.

Alex Oxlade-Chamberlain (59 mins) 5 – Barely got involved in the game and certainly didn’t do anything positive after coming on at 1-2.

Marko Grujić (8 mins) N/A – Another late run out for the youngest.