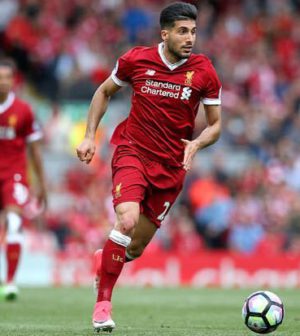 Barcelona were strongly interested in Liverpool attacker Philippe Coutinho over the summer but the Premier League club refused to sell.

Now the Juventus CEO has revealed that the Serie A champions made an offer for another Liverpool midfielder over the summer.

Speaking to Italian television show Premium Sport (via Calcio Mercato) on Sunday, Juventus CEO Beppe Marotta revealed that his side made an offer for Emre Can during the last transfer window.

Marotta is quoted as saying:

“Our team is absolutely competitive and we have some very interesting midfielders like Bentancur who has already showed his qualities. We have faith in this team and in these lads. As for Emre Can I don’t think Liverpool will sell him in January. We made an offer for him in the summer but the Reds didn’t sell him so I don’t think they’ll change their mind in the middle of the season.”

Juventus manager Max Allegri has changed between a 4-2-3-1 and 4-4-2 formation this season and has the likes of Blaise Matuidi, Sami Khedira, Federico Bernardeschi, Rodrigo Bentancur and Claudio Marchisio to pick from in the centre midfield role.

Matuidi was a surprise signing from Paris Saint-Germain in mid-August but one would think he would have been the Italian giants first choice over Emre Can.  20-year-old Bentancur had already joined at the start of the summer transfer window.

Marotta’s comments suggest that they would still make a move for Emre Can but for Liverpool not being willing to sell.  Perhaps Khedira, Marchisio or Bernadeschi could be available for transfer in January or next summer, but that’s just us speculating.

Emre Can is a staple in Jürgen Klopp’s starting lineup playing as a box-to-box midfielder in the German coach’s 4-3-3 formation.  Liverpool have been without Adam Lallana this season but even James Milner has failed to replace the young German midfielder since being ditched from his left-back role in favour of Alberto Moreno.