Who better than Kevin De Bruyne? 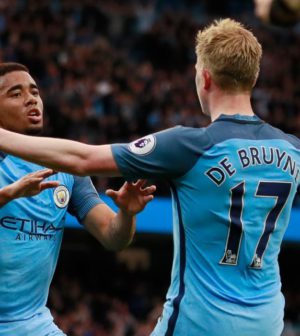 Manchester City went sole top of the Premier League yesterday with a 7-2 demolition of Stoke City after Manchester United were held 0-0 at Liverpool.

Six different players got on the scoresheet for Pep Guardiola’s side as Sergio Agüero returned to the substitutes bench following his crash in Amsterdam.

Gabriel Jesus opened the scoring on 17 minutes against a Stoke side coached by former City manager Mark Hughes, before goals from Raheem Sterling and David Silva gave the Citizens a commanding 3-0 lead inside half hour.

Stoke got back into the game against the run of play.  Mame Biram Diouf scored just before half-time and an own goal from Kyle Walker made it 3-2 two minutes into the second half.

However, Guardiola’s side ran out deserving and convincing winners at the Etihad.

The star of the show was playmaker Kevin De Bruyne, who was substituted midway through the second half with the score 6-2.

De Bruyne recorded two assists and made one of the passes of the season that led to City’s second goal.  He forced two saves out of Stoke goalkeeper Jack Butland.

There is no doubt that Kevin De Bruyne is the best playmaker in the Premier League right now with Eden Hazard far from his best after being injured over the summer and only recently heading back towards full fitness.  Manchester United don’t have anyone near the Belgian’s playmaking ability.  And Mesut Özil is too inconsistent and doesn’t show up for big games for Arsenal.

Check out Kevin De Bruyne’s assists and all the goals from Manchester City 7-2 Stoke City here: