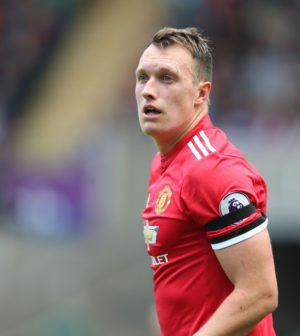 Manchester United could receive a big injury boost after the international break in time for their return to Premier League action when they take on rivals Liverpool at Anfield on Saturday 14 October.

The two teams are currently heading into the big lunchtime clash with a number of injuries.

José Mourinho will be without Paul Pogba, Michael Carrick, Zlatan Ibrahimović and Marcos Rojo, whilst Anthony Martial and Marouane Fellaini are both doubts.  Jones has played every minute of all seven Premier League games for the Red Devils this season, winning six and keeping a clean sheet in each of those games.

Meanwhile Liverpool will have to make do without Adam Lallana and Nathaniel Clyne whilst attacking stars Philippe Coutinho and Roberto Firmino could both feature for Brazil in the early hours of Wednesday morning GMT.

Phil Jones has formed a good partnership with Eric Bailly in the centre of Manchester United’s defence to start the 2017-18 season, leaving Chris Smalling on the substitutes bench.

Liverpool have a fearsome attack with Sadio Mané, Mohamed Salah, Coutinho and Firmino to choose from, whilst Daniel Sturridge could also be available to Jürgen Klopp, so Mourinho will want all of his defenders fit and available where possible.

The Liverpool Echo are reporting good news for Mourinho and United today by claiming that Phil Jones will be fit to play on Saturday despite being withdrawn from the England squad ahead of their final two 2018 World Cup qualifiers.