Liverpool player claims he was kicked by Man Utd star 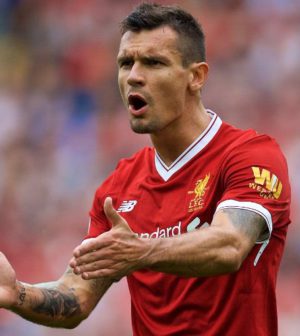 Liverpool defender Dejan Lovren has today accused Manchester United star Romelu Lukaku of ‘deliberately kicking’ him during the 0-0 draw between the two sides at Anfield on Saturday.

The pair collided shortly before half-time in which the Croatian centre-back was left rolling around on the floor whilst holding his face.

Referee Martin Atkinson took no action on the Manchester United striker and both the Sky Sports commentators and pundits alike all believed that the clash was nothing more than an accident when covering the game live.

However, Dejan Lovren did not see it that way.  The 28-year-old is quoted on the BBC as saying:

“My honest view is that he did it on purpose.

“He was over me, he could have moved away. Even if he did it normally he would apologise after that, but I saw he was nervous during the game so maybe that was also the reason.”

The draw saw Manchester United fall two points behind Manchester City at the top of the Premier League as Pep Guardiola’s side hammered Stoke City 7-2 at the Etihad.

Romelu Lukaku fired Manchester United’s only on target effort all game, straight at goalkeeper Simon Mignolet, on the stroke of half-time after a nice one-two with Henrikh Mkhitaryan.

The Reds can take pride in that they took the game to a side who had won six of their first seven games this season but at the end of the day, aside from Joël Matip forcing a great save out of David de Gea, the United goalkeeper wasn’t overly tested.