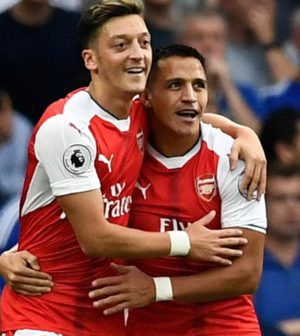 Arsenal were 2-0 winners in today’s North London derby, moving them joint on points with Chelsea in fourth and one point behind their rivals Tottenham ahead of the rest of the weekend’s Premier League games.

Goals from Shkodran Mustafi and Alexis Sánchez in the first half proved the difference as Tottenham didn’t show up at the Emirates today in which we also saw an excellent performance from the whole Arsenal team.

Petr Čech 6 – Made a couple out routine saves to deny Harry Kane and then clawed a header from Eric Dier away in the final 10 minutes in an otherwise uneventful day for Arsenal’s goalkeeper.

Laurent Koscielny 9 – A rock at the back denying Harry Kane and Dele Alli any clear opportunities on goal.  Laurent Koscielny made a couple of tackles, a number of interceptions around his own penalty area and won his fair share of aerial battles.

Shkodran Mustafi 9 – Likewise, the German didn’t allow Tottenham as much as a sniff at goal, and also scored the opening goal with a good header.  Made a couple of good blocks too.

Nacho Monreal 8 – None of Tottenham’s front three made any impact on this game as Arsenal had them in their pocket all afternoon.

Héctor Bellerín 7 – Comfortable game at wingback as Ben Davies never offered much threat.  The one time Héctor Bellerín was slow to get across to Davies led to Christian Eriksen hitting the outside of the post.  The Spaniard was played in down the wing by Aaron Ramsey in the first half but as per usual his cross failed to pick out a teammate.

Aaron Ramsey 8 – Was disciplined in his central midfield role today in that Aaron Ramsey didn’t venture forward too frequently leaving space for the counter attack.  Won the ball back on a number of occasions too.

Granit Xhaka 7 – Saw his fair share of possession, picked up a yellow card to break up a Tottenham attack – just a regular day at the office for Granit Xhaka.

Mesut Özil 9 – Excellent both in possession and off the ball today, Mesut Özil floated in the free kick for Arsenal’s opener and set the tone of the game by closing down opposition off the ball and getting stuck in.

Alexis Sánchez 9 – Another excellent performance from Alexis Sánchez who worked hard and scored the second goal five minutes before half-time that proved to be the killer.  The Chilean looked after the ball well, made some good runs off the ball and was denied a one-on-one twice by an alert Hugo Lloris.

Alexandre Lacazette 7 – Made some very good runs off the ball and was denied the opener by some very good defending from Davinson Sánchez from a yard out.

Francis Coquelin (18 mins) N/A – Brought on for Lacazette in the final 20 minutes to help see out the clean sheet and win.

Hugo Lloris 6 – Didn’t have a chance with Arsenal’s opener, seemed to lose his balance on the second but did make two saves from Alexis Sánchez inside the six-yard box in the second half.

Eric Dier 5 – Really struggled with the runs of Lacazette and Sánchez today.  Saw an effort on goal denied by Petr Čech in the final 10 minutes.

Davinson Sánchez 7 – Was unfairly given a free kick against him which led to Arsenal’s opener.  Davinson Sánchez did well denying Lacazette at 0-0 and had a good game in the back three.

Jan Vertonghen 7 – Beaten by the sharpness of Alexis Sánchez for Arsenal’s second but otherwise not the worst of performances from Jan Vertonghen.

Kieran Trippier 6 – Didn’t influence the game in attack and had a tough game defensively against Alexis Sánchez.

Mousa Dembélé 6 – Did his best in the first half to win back the ball for his side but ultimately the opening 45 minutes belonged to Arsenal both in terms of possession and territory.  Was replaced on the hour.

Moussa Sissoko 5 – Wanted to be more of an attacking threat than defensive despite seemingly being named in front of the back three.  Moussa Sissoko was poor defensively.

Ben Davies 6 – Made the occasional attack from left wingback but ultimately couldn’t change the outcome of the game.

Dele Alli 4 – Another quiet game from Dele Alli today who was poor in possession and whose only efforts were long rangers that didn’t test the Arsenal goalkeeper, before he was substituted.

Christian Eriksen 5 – Quiet game from the Dane who saw an effort deflected our for a corner but otherwise did little of note.

Harry Kane 5 – A lack of supply in a quiet and frustrating game for Harry Kane which proved to be his first North London derby without a goal.

Harry Winks (29 mins) N/A – Like-for-like switch with Mousa Dembélé and it was Arsenal who look more likely to score in the final half hour than Tottenham.

Heung-min Son (16 mins) N/A – Saw an effort deflected over the bar in stoppage time but otherwise not enough time or possession to make an impact.

Fernando Llorente (16 mins) N/A – Barely got a touch of the ball after coming on.