Why would José Mourinho want David Luiz at Man Utd? 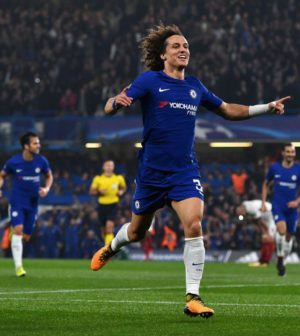 David Luiz’s future at Chelsea has come into question in recent weeks following Antonio Conte’s decision to drop him from the starting lineup in the Blues’ 1-0 win over Manchester United last weekend.

This came following a report that the Brazilian had a bust up with his manager after their 0-3 thrashing at AS Roma in the UEFA Champions League at the end of October.

21-year-old Andreas Christensen stepped in his place and was part of the back three that kept the clean sheet versus United, limiting the visitors to only two shots on target all game.

The Danish centre-back has received rave reviews for his performances for the West London club when he has been given a chance this season.  Chelsea have also been linked with signing other centre-backs in the January transfer window.

David Luiz has subsequently been linked with a move to Manchester United to work with José Mourinho again.  The Portuguese coach worked with the 30-year-old at Chelsea during the 2013-14 season.  However, he only gave Luiz 15 starts that season, most of which were further forward in the holding midfield role, and then sold him to Paris Saint-Germain for £50 million before a disastrous World Cup campaign.

The Express are one of several media outlets linking Luiz with a transfer to Old Trafford.

Mourinho didn’t seem keen on either Phil Jones, Chris Smalling, Daley Blind or Marcos Rojo at centre-back last season and signed Victor Lindelöf from Benfica before the start of this campaign, presumably with the intention of the Swede partnering Eric Bailly.

However, Lindelöf has looked woeful in the couple of opportunities he’s had this season after some terrible mistakes in pre-season.  Mourinho even admitted heading into the new season that his big summer signing would take time to settle into life in England.

Phil Jones and Chris Smalling have played well this season but have both been prone to mistakes.  Jones notably making costly errors in United’s 2-2 draw at Stoke City earlier this season.

However, given his age, his previous experience under Mourinho, and the money you’d expect Chelsea to demand from one of their rivals, I simply cannot see Manchester United making a move for David Luiz.