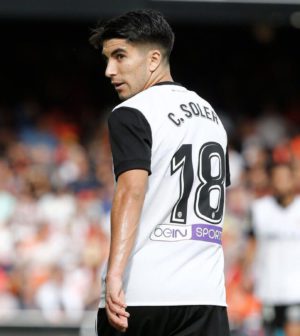 Manchester United have been linked to a number of attacking targets since the summer transfer window shut at the end of August.

Internazionale’s Ivan Perišić was constantly linked with a move to Old Trafford during the last transfer window but rumours have died down since.

Today the Independent are claiming that Valencia winger Carlos Soler is now José Mourinho’s top priority when the window re-opens in the New Year.

The 20-year-old has scored one goal and recorded four assists in his 11 La Liga games for Valencia this season.  He is predominately a right winger.

United this season have predominately been using Juan Mata and Jesse Lingard down the right, though also have Ashley Young and Marcus Rashford who can play here.  However, Young is mostly used as a left-back these days, and Rashford on the left wing.

The Independent claim that Carlos Soler has impressed United staff over the past 11 months since making his first team debut.  And despite his lack of experience, the report also claims that he would cost United around £40 million.

Carlos Soler likes to run at defenders with the ball and also plays a good through ball.  He is part of a Valencia side who are currently on a seven-game winning streak in La Liga and second in the table.

However, Valencia’s debts could mean that the Spanish side may cash in on their young talent to help balance the books.