Does this mean Alexis Sánchez will leave Arsenal in January? 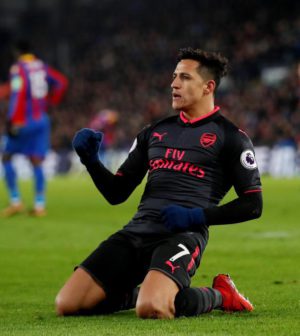 Manchester City’s record 18-game winning streak in the Premier League came to an end as they were held 0-0 at Crystal Palace earlier today.

The hosts even missed a number of good opportunities which included Luka Milivojević seeing his 90th minute penalty saved by Ederson in the City goal.

Although Pep Guardiola’s side have an unassailable 14-point lead at the top of the Premier League they could be dealt some bad news in the following days.

Midway through the first half striker Gabriel Jesus went off with what appeared to be a knee injury.  Although the Brazilian has now gone 10 games in all competitions without a goal for the Citizens he is still a big part of Guardiola’s side.

To add further worry to both their UEFA Champions League and FA Cup campaigns, Kevin De Bruyne was stretchered off in stoppage time following a lunge from behind by Jason Puncheon.  Seconds later the Crystal Palace was too on a stretcher, following a challenge at the other end.

Speaking in his post-match interview, Pep Guardiola predicted that Jesus will be out for one to two months.

Better news for City fans is that De Bruyne doesn’t appeared to have suffered a serious injury with the manager claiming he’s unlikely to face Watford in two days’ time but should be fine after that.  The Belgian superstar would be expected to be rested for their FA Cup third tie against Burnley next weekend.

“Hopefully he [Gabriel Jesus] will be one month, maybe two months he will be out.

With Kevin we have been lucky in the past with what has happened from the same actions. I don’t know what will happen in the future.

“He may not be ready for Watford in a few days.”

Gabriel Jesus has played as both a striker and on the left side of City’s attack this season, and if he is going to be out for two months it could force the runaway Premier League leaders’ hand in the January transfer window, which opens in under 24 hours’ time.

Arsenal star Alexis Sánchez is heading into the final six months of his deal at the Emirates with no sign of agreeing a new deal.  Reports have even suggested the Chilean has not been himself in training in recent weeks, suggesting he wants a move away from the club as soon as possible.

Manchester City were strongly linked with the forward over the summer, and almost signed him on deadline day but for making their offer too late.

Could they now match Arsenal’s requested asking price and bring the former-Barcelona player to the Etihad for the second half of the season?