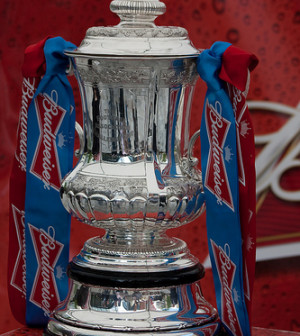 The draw for the fourth round of this season’s FA Cup took place this evening with the four favourites all being handed favourable draws.

Premier League runaway leaders Manchester City have seen their odds to win the FA Cup drop three times in as many days.  Pep Guardiola’s side had been 4/1 to win this season’s tournament prior to their 4-1 thrashing of Burnley in the third round on Saturday.

The following day, the defending champions and one of the favourites this season, Arsenal, were eliminated, 4-2 at Nottingham Forest, which saw City’s odds drop further.

Manchester City were this evening drawn to face either Cardiff City or Mansfield Town in the next round, taking place over the final weekend of January.  Their odds are now 4.1 to win the 2017-18 FA Cup with Betfair.

Second favourites Manchester United will travel down south to face League Two opposition Yeovil Town.  Should Chelsea win their third round replay at home to Norwich City next Wednesday Antonio Conte’s side will be at home to fellow Premier League side Newcastle United.

The Magpies were comfortable 3-1 winners over League Two leaders Luton Town this past weekend.

Tottenham Hotspur have been handed a trip to Wales to take on League Two side Newport County.