Where will Luke Shaw end up in January? 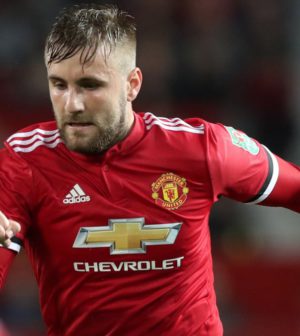 Manchester United left-back Luke Shaw is back in first team training but is yet to make a single Premier League appearance this season as he continues to be linked with a move away from Old Trafford.

The 22-year-old has been limited to only 48 minutes of first team action this season across two substitute appearances in the EFL Cup after coming back from a serious injury sustained back in April.

Shaw has been an unused substitute in United’s last two UEFA Champions League group stage matches as well as once in the Premier League but manager José Mourinho appears to have lost faith in the England international.

The Portuguese coach has preferred Ashley Young at left-back this season with Marcos Rojo himself only recently back from injury.  Daley Blind had started the season as Manchester United’s left-back before losing his spot to 32-year-old Young.

Luke Shaw has been strongly linked with a move to Tottenhan Hotspur with suggestions that Danny Rose could move in the opposite direction.  The Red Devils have been chasing Rose since last summer but a deal has failed to materialise.  Following the 27-year-old’s outburst over the summer in which he said the club aren’t ambitious enough and do not pay their star players sufficiently, Rose is widely expected to leave the North London club in January.

As well as being linked with a move to Spurs, Shaw’s former club Southampton are also believed to be in line for his signature, as are Newcastle United.