Is David de Gea the best goalkeeper in the world? 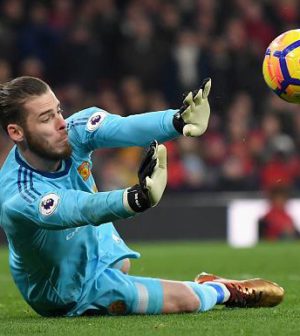 Manchester United were 3-1 winners at Arsenal today to move within five points of Premier League leaders Manchester City and seven ahead of the Gunners down in fifth.

Arsène Wenger’s side dominated both possession and territory throughout the game but were frustrated by an unbelievable display by David de Gea in the Manchester United goal.

The visitors had taken an early 2-0 lead at the Emirates through goals from Antonio Valencia and Jesse Lingard in the opening 11 minutes, each following a mistake from the Arsenal defence.

José Mourinho’s side were then pushed back in their own half and saw their goal bombarded by Arsenal.  Their goalkeeper made save after save until Aaron Ramsey broke the offside trap inside five minutes of the restart, teeing up Alexandre Lacazette to score from close range.

Arsenal fans can be forgiven for thinking they were going to get a result from this point.  Lacazette and Alexis Sánchez both saw efforts denied by world class saves from the Spanish stopper.

To add to Arsenal’s woes, Jesse Lingard tapped in from close range just after the hour following a nice assist from Paul Pogba.  The French star was then sent off with just over quarter-on-an-hour to go for a stamp on Héctor Bellerín.  However, United were still able to hold on to their 3-1 victory.

Pogba’s sending off means he will now serve a three-match ban which sees him miss next weekend’s Manchester derby.

Speaking after the game, Mourinho described de Gea’s performances as one of the best in the world, saying:

“You need the keeper to be there for you when the team needs.

“I told De Gea after the match, what I saw today was the best from a goalkeeper in the world.”

David de Gea has constantly been linked with a move to Real Madrid and this performance may only see speculation increase linking the 27-year-old to the Santiago Bernabéu Stadium.