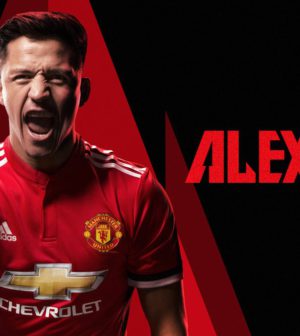 The biggest transfer saga of the January transfer window has finally come to a conclusion as Manchester United have just announced the signing of Alexis Sánchez in a swap deal with Arsenal.

Henrikh Mkhitaryan has gone in the other direction to North London in a deal where no money exchange hands between either club.

Sánchez had been in the final six months of his deal at the Emirates with no intention of signing a new deal.  Gunners boss Arsène Wenger decided that getting a player in exchange for the Chilean superstar was better than losing their star for nothing in the summer.

The 29-year-old had not featured in either of Arsenal’s last two games.

Speaking to MUTV, Manchester United’s latest signing Alexis Sánchez admitted he was delighted to be signing for the biggest football club in the world.  He said:

“I am thrilled to be joining the biggest club in the world. I have spent three-and-a-half wonderful years at Arsenal and I bring with me very positive memories of that great club and its fans. The chance to play in this historic stadium and to work with José Mourinho was something I could not turn down. I am very proud to be the first Chilean player ever to play for United’s first team and I hope I can show our fans all around the world why the club wanted to bring me here.”

United boss José Mourinho says he has acquired one of the best attacking players in the world:

“Alexis is one of the best attacking players in the world and he will complete our very young and talented group of attacking players. He will bring his ambition, drive and personality, qualities that make a Manchester United player and a player that makes the team stronger and the supporters proud of their club dimension and prestige.”

After joining United ahead of the 2016-17 season, one of Mourinho’s first signings at Manchester United was Henrikh Mkhitaryan from Borussia Dortmund.  The Armenian attacker struggled badly to settle in at Old Trafford but now has a chance to resurrect his career at Arsenal.  The Portuguese coach wished him the best of luck:

“I would like to wish Henrikh all the success and happiness that I am sure he is going to get. He is a player that we will not forget, especially for his contribution to our Europa League victory.”