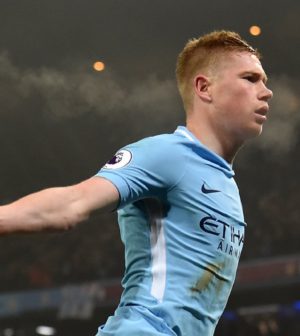 Manchester City have announced that Kevin De Bruyne has signed an extension to his contract, keeping him at the Etihad until 2024.

GET EXCITED! ?@DeBruyneKev has today signed a new contract at the Club!

The 26-year-old has arguably been the best player in the Premier League so far this season, scoring six goals and recording 10 assists in his 24 starts so far this season as Pep Guardiola’s side have a 12-point lead at the top of the table.

De Bruyne arrived at the Etihad in a club record £55 million transfer from VfL Wolfsburg in January 2016 and was a League Cup winner the following month.  He has been an excellent player since he arrived but is no doubt playing the best football of his career right now.

The Belgian superstar started his career at Genk in his homeland before moving to André Villas-Boas’ Chelsea for £7 million in January 2012, but was immediately returned on loan to the same club.

Kevin De Bruyne made only three Premier League appearances for Chelsea before being loaned and then sold to German Bundesliga outfit Wolfsburg for £18 million.  When given the chance to prove himself in Germany he won the Bundesliga Player of the Season award being attracting the attention of some of Europe’s biggest clubs, ultimately signing for the current Premier League leaders.

The player has been key to Pep Guardiola’s side’s success so far this season as they compete to win an unprecedented quadruple – competing for the Champions League, Premier League, FA Cup and EFL Cup in the same season.