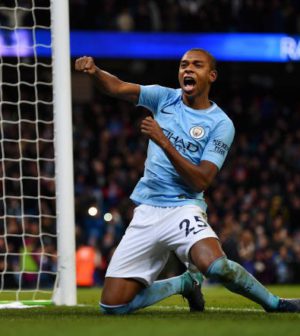 Manchester City have announced that Fernandinho has extended his contract at the Etihad Stadium until 2020.

The Brazilian midfielder has been outstanding for the runaway Premier League leaders this season, sitting in front of the centre-backs as the full-backs bomb on to support the five attacking players in Pep Guardiola’s team.

Fernandinho arrived in a £30 million deal from Shakhtar Donetsk in June 2013 and played exactly 33 Premier League games in each of his first three seasons in Manchester.  Last season he made 32 more appearances and so far during the 2017-18 campaign the 32-year-old has started 23 of City’s 24 games, coming on in the other one.  He has scored two goals and recorded three assists for the Premier League’s highest-scoring team.

In total, the Brazilian international has scored 19 goals in 212 games for Manchester City, including one in their successful 2016 EFL Cup final.

Fernandinho is Manchester City’s best defensive midfielder and İlkay Gündoğan is their only real backup to the Brazilian.  Even then, the German international has played a more attacking role under Guardiola this season.  Other options should he be injured or suspended are Yaya Touré, who is not as mobile or hard-working, and Fabian Delph, who isn’t great defensively.