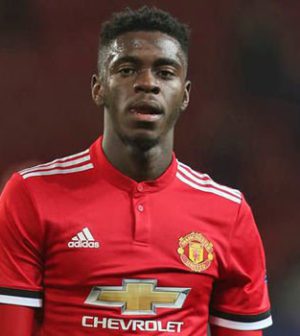 Manchester United defender Axel Tuanzebe will spend the remainder of the 2017-18 season on loan at Championship side Aston Villa.

The 20-year-old has made only one start and three appearances for José Mourinho’s side so far this season – the full 90 minutes versus Swansea City in the EFL Cup, a substitute appearance in United’s last UEFA Champions League group stage match versus CSKA Moscow, and stoppage time versus Everton in the Premier League on New Year’s Day.

Aston Villa are currently three points behind second place Derby County in the Championship as Steve Bruce’s side have hit a run of form.  The Villans are widely-expected to achieve automatic promotion back to the Premier League alongside fellow West Midlands club Wolverhampton Wanderers.

Axel Tuanzebe is a highly-rated youngster with big promise for the future.  United will be hoping he can become a regular player in Bruce’s defence to gain valuable first-team experience before the start of next season.

Villa also have goalkeeper Sam Johnstone on loan from Manchester United, whilst former-United defenders James Chester and Ritchie de Laet are also at the club.

José Mourinho confirmed to MUTV that there are currently a lack of opportunities at Old Trafford but that he rates the youngster very highly, recently saying:

“Tuanzebe is a very good player that is not having lots of possibilities to play here.

“But he’s our player and he will be our player – no chance we give up on such a talented boy. He is a player that we like very much.”