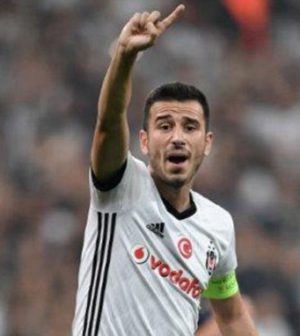 Arsenal have made an offer to re-sign Beşiktaş playmaker Oğuzhan Özyakup on a free transfer when his contract expires at the end of the season, according to reports.

The 25-year-old originally joined Arsenal as a teenager in 2008, coming up through the Gunners’ youth system before making his debut against Shrewsbury Town in the League Cup three years later.

However, Özyakup did not play a single Premier League game and his Arsenal career compiled of just two substitute appearances in the League Cup.

The midfielder then left the Emirates in 2012 joining Turkish Süper Lig side Beşiktaş for £450,000.  He has gone on to make over 200 appearances for the club in all competitions and has won the league title on two occasions.  The Black Eagles are currently three points off the top this season too.

Netherlands-born Oğuzhan Özyakup has 30 caps for the Turkish national team but his future at Beşiktaş is in serious doubt as his contract at the Vodafone Arena is set to expire at the end of the current campaign and he has so far refused to sign a new deal.

It would appear that Arsène Wenger has kept an eye on his former youngster as the Mirror are today citing reports out of Turkey that claim Arsenal want to lure the centre midfielder back to North London this summer.

The report goes as far to say that the Gunners have already put a contract offer on the table to Özyakup and are waiting on the player’s decision ahead of a potential free transfer move back to his former team.

It was a surprise that Wenger didn’t add another central midfielder to his squad during the January transfer window after selling Francis Coquelin to Valencia, with Santi Cazorla’s career in doubt with his injury woes and both Jack Wilshere and Aaron Ramsey consistently suffering with injury problems of their own.

The Arsenal boss is certainly expected to add a player or two in this role over the summer and it appears in Oğuzhan Özyakup that Wenger has already identified one target.

Whether Özyakup would be a regular first team player at Arsenal is questionable given the talent they already have at their disposal.  He can play in front of the back four but is a better passer of the ball than winning it for his side.  In fact, he is an excellent passer of the ball who creates several chances for his side, though rarely gets among the goals himself.