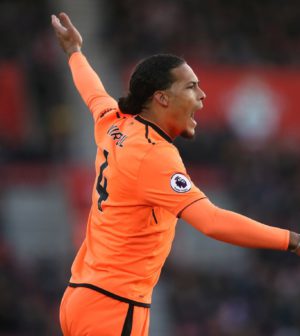 Liverpool’s 2-0 win at Southampton this afternoon has moved the Reds back into third position and closed the gap on Manchester United to two points with 11 games to go.

Mohamed Salah and Roberto Firmino each scored in the first half as Jürgen Klopp’s side picked up another three points on the road against an out-of-form Southampton side.

The Saints have won just one of their past 14 Premier League games, keeping only one clean sheet during that run as they dropped into the relegation zone earlier today courtesy of wins for Huddersfield Town and Newcastle United.

Loris Karius 8 – The Liverpool goalkeeper had a good game in keeping a clean sheet today.  Loris Karius denied both Pierre-Emile Højbjerg and James Ward-Prowse in the first half as well as starting the attack that led to their opening goal.

Trent Alexander-Arnold 7 – A solid game from the youngster who dealt adequately with getting back to cover the space he left behind at right-back, and offered width going forward.

Joël Matip 6 – Wasn’t the best of performances from Joël Matip who lost his balance at times and was arguably Liverpool’s weakest point in their back four.

Andy Robertson 6 – Allowed Højbjerg an excellent opportunity in the first half but otherwise didn’t have any other nervy performances defensively.  Was careless in possession at times though.

Emre Can 7 – Solid game in protecting his back four and was fine in possession.

Georginio Wijnaldum 7 – Did a good job in helping pack the Liverpool midfield to prevent Southampton creating many chances through the middle.  Georginio Wijnaldum also started attacks with some quick passes from inside his own half.

Alex Oxlade-Chamberlain 7 – Helped set up the opening goal in a functional performance in central midfield before being replaced on the hour.

Mohamed Salah 9 – Another excellent display from the Egyptian who unselfishly set up Liverpool’s opener and then scored the second himself.  Mohamed Salah constantly caused Southampton problems with his runs down the right wing.

Roberto Firmino 9 – The Brazilian notched up his 20th goal in all competitions this season with a fine first-time finish after poor Southampton defending.  Roberto Firmino then pulled off a sensational backheel to play Salah in one-on-one for Liverpool’s second.

Sadio Mané 6 – Poor decision-making from the Senegalese international who didn’t do enough with the ball in good positions today.

James Milner (30 mins) N/A – Came on to sure up the midfield and help see out the victory for the final half hour.

Adam Lallana (13 mins) N/A – Brought on to face his former club but didn’t do anything of note.

Dejan Lovren (2 mins) N/A – Introduced in the final couple of minutes just to add salt into the wounds of the Southampton fans.