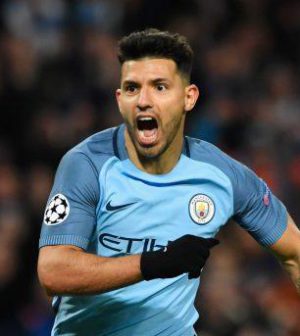 Manchester City travel to Liverpool on Wednesday for the first leg of their UEFA Champions League quarter-final tie.

The two legs will take place in the space of a week and either side of Saturday’s Manchester derby in which Pep Guardiola’s side can wrap up the Premier League title.

Prior to the game, the City boss has spoken to the media today to give a team news and injury update ahead of tomorrow’s clash.

The big news from his conference was that star striker Sergio Agüero will miss the trip to Merseyside.  The Argentine international has been struggling with a knee injury in recent weeks and hasn’t played since the Citizens’ 1-0 win over Chelsea at the beginning of March.

Gabriel Jesus has been starting in Agüero’s absence, failing to score in the 2-0 win at Stoke City last month before getting on the scoresheet in the 3-1 win at Everton on Saturday.  The Brazilian also scored the consolation goal in Manchester City’s Champions League second leg defeat at home to FC Basel in the last round.  However, Jesus has yet to find the form he ended last season with which saw Agüero demoted to the bench.

The City boss was able to confirm that Sergio Agüero is making good progress on his road to recovery but that the first leg will come too soon for him.

“Sergio is back in Manchester. He did not come. He was injured in the last two weeks.

“He is much, much better but the doctors spoke to him today and he said he still has a little bit of a problem and isn’t comfortable.”

Asked whether the club’s all-time top goalscorer would be fit to face Manchester United on Saturday, Guardiola simply said:

Some positive news on the injury front for Manchester City fans was that the manager was able to confirm that Fabian Delph is available for selection once again.  The England international has not played since the FA Cup exit at the hands of Wigan Athletic back in February.

“Fabian Delph is back, Danilo can play there.

“I have an idea [about who will play] but you understand I can’t tell you!”

Manchester City were 5-0 winners over 10-man Liverpool back in September but Reds won the most recent matchup, 4-3 at Anfield, back in January.