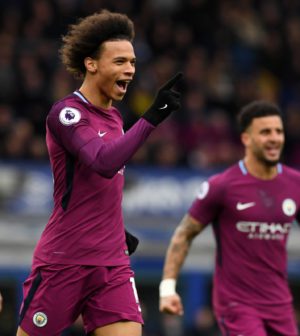 Manchester City maintained their 16-point lead over Manchester United at the top of the Premier League with an emphatic 3-1 victory at Everton this evening.

The result means Pep Guardiola’s side can confirm the Premier League title on Saturday, either side of the two legs of their UEFA Champions League quarter-final tie with Liverpool.

City retained a staggering 82% of possession at Goodison Park, winning the game in the first half through goals from Leroy Sané (4′), Gabriel Jesus (12′) and Raheem Sterling (37′), before Yannick Bolasie scored a 63rd minute consolation for Sam Allardyce’s side.

Here are how the player’s faired in Everton 1-3 Manchester City:

Ederson 6 – The Brazilian had little chance with Bolasie’s well-placed strike which Ederson would have been late to see.  Secure with handling the couple of crosses and high balls the home side put into the penalty area but otherwise had a quiet game.

Kyle Walker 8 – Kept Yannick Bolasie quiet down the wing either side of the consolation goal.  Kyle Walker offered width down the right throughout the game when bombing forward.

Vincent Kompany 7 – Everton offered little threat to the captain whose main responsibility today was to maintain possession for his side.  Vincent Kompany did just that by completing 95% of his passes.

Nicolás Otamendi 7 – Most notable play from the centre-back was the long passes to Leroy Sané down the left wing which Nicolás Otamendi completed many times today.  Everton offered very little threat in open play.

Aymeric Laporte 7 – Played a part in the opening goal and had a comfortable game at left-back despite not being his natural position.

Fernandinho 9 – Had more touches than Everton’s five starting attacking players combined.  Fernandinho won back possession when needed to start attacks and was a calming figure as the anchor man.

Raheem Sterling 8 – Nice finish for Manchester City’s third and his runs were a real problem for Leighton Baines in the Everton defence.  Perhaps will be disappointed not to have scored more than one.

Kevin De Bruyne 8 – Saw a lot of the ball and completed pass after pass as per usual but Kevin De Bruyne did only create a couple of chances today.  Though one was his fine volleyed cross to pick out Gabriel Jesus for Manchester City’s second goal.

David Silva 10 – Superb cross for City’s opener and then a beautiful pass to setup the third.  David Silva ran the show today, completing 94% of his passes, creating numerous chances and setting up two goals.  Everton simply couldn’t handle the Spaniard even after a couple of cynical fouls on him.

Leroy Sané 9 – Excellent controlled volley into the corner for Manchester City’s first goal in the opening five minutes.  Leroy Sané’s pace and trickery hurt the Everton defence for 90 minutes and was able to create a fair few chances for his teammates too.

Gabriel Jesus 8 – Arguably the best performance of the season from the Brazilian who doubled City’s lead after only 12 minutes with a bullet header.  Although that was Gabriel Jesus’ only shot of the match the striker worked his socks off for the good of his teammates.

Danilo (5 mins) N/A – Nothing more than a late run out for the left-back who could start midweek.