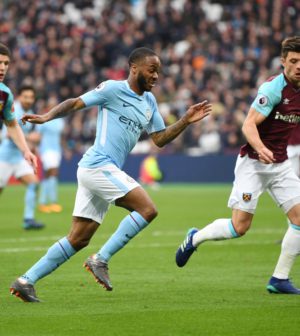 Manchester City ran out comfortable 4-1 winners at the London Stadium this afternoon as Pep Guardiola’s side close in on the Premier League records for most points and most goals in a single season.

The 2017-18 Premier League champions were ahead as early as the 12th minute when Leroy Sané‘s 20-yard-effort flew in via a big deflection off of Patrice Evra.  The goal had been coming as City took the game to West Ham from the start.

City doubled their lead just before the half hour mark when a scramble in the box eventually saw the ball goal in off former player Pablo Zabaleta for an own goal.

West Ham reduced the score just before half-time when Aaron Cresswell curled home a free kick in what would turn out to be David Moyes’ side’s only shot on target all game.

Shortly after the break Raheem Sterling slid in Gabriel Jesus to tap home from close range before Sterling then set up an unmarked Fernandinho to slide home City’s fourth as the West Ham’s defence wasn’t in sight.

Ederson 6 – The Brazilian goalkeeper had little to do all afternoon.

Kyle Walker 8 – Comfortable game defensively today for the right-back who spent most of his hour on the park playing as a right winger.  Kyle Walker created a couple of chances for his teammates before being replaced by Danilo.

Nicolás Otamendi 8 – The Argentine centre-back kept Marko Arnautović under control today as the West Ham striker had few touches of the ball and didn’t test Ederson once.

Aymeric Laporte 8 – A rare game at centre-back under Pep Guardiola for the French youngster and it was a comfortable game for Aymeric Laporte as West Ham barely threatened.

Fabian Delph 8 – Saw a lot of the ball down the left and cut inside on occasion.  Fabian Delph cut out a few long balls too but Pablo Zabalata didn’t test him defensively.

Fernandinho 9 – Helped Manchester City control possession and got on the scoresheet in the second half when he burst into the West Ham half without being tracked by a single defender.

İlkay Gündoğan 8 – Good performance from the German midfielder who started attacks and created the odd opportunity for his teammates.

Kevin De Bruyne 9 – Another majestic performance from the Belgian playmaker despite not getting among the goals today.  Kevin De Bruyne fired in a fare few efforts on goal and got the ball to the attacking trio time and time again.

Raheem Sterling 10 – Excellent performance down the right from Raheem Sterling who set up three of Manchester City’s goals today.  The Englishman’s pace really hurt the West Ham defence to allow him to pull the ball back to teammates.  Sterling will be disappointed not to get on the scoresheet with the number of efforts he had.

Gabriel Jesus 8 – Put his only effort on target into the back of the net and brought teammates into play as well as creating the occasional chance.

Leroy Sané 8 – Scored the opening goal and the German’s pace really hurt Pablo Zabaleta and the West Ham defence.  Leroy Sané looked after the ball very well and created a couple of chances for teammates.

Danilo (30 mins) N/A – A half hour run out for the Brazilian who didn’t have anything to do defensively.

Yaya Touré (20 mins) N/A – Expected to be one of the Ivorian’s final games for Manchester City.  Yaya Touré saw a free kick blocked late on.

Lukas Nmecha (11 mins) N/A – The youngster made his Premier League debut for the final 10 minutes of today’s game.