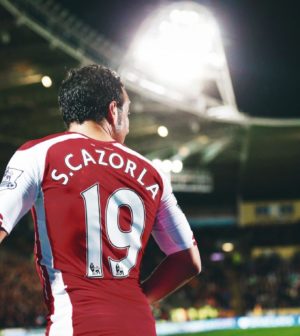 Santi Cazorla will leave Arsenal once his contract expires this summer, the club have confirmed.

The 33-year-old has been out of action since October 2016 since suffering from a serious Achilles injury.

Cazorla has made a total of 180 appearances for the Gunners since joining from Málaga CF in 2012 and had been an instrumental player in Arsène Wenger‘s midfield prior to his injury.

The Spaniard will leave the North London club with two FA Cup winners’ medals which includes scoring in their 3-2 victory against Hull City in the final at Wembley Stadium in 2014.

A statement on the club’s website earlier today confirmed the news, with Carzola quoted as saying:

“I am very sad to be leaving after so many great times.

“I have loved my time with the club. I will always remember the special moments we had together. The FA Cup in 2014 is something we will never forget.

“I am very proud to be part of this club’s history.”

Santi Cazorla has several surgeries on his injury and in November 2017 doctors even told him he should be “satisfied” to walk again due to the severity of his injury in his right ankle.

Several footballers recover with protein powder but Cazorla was forced to have skin removed from his arm and grafted on to his leg after the infection left him with “eight centimetres missing” from his Achilles tendon.

Although their are great fears that the playmaker may never play football again, he will reportedly train with former club Villarreal over the summer.