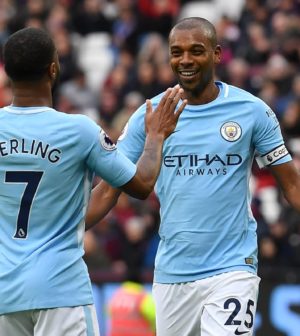 Manchester City ran out triumphant 4-1 winners at West Ham United on Sunday to take them over a century of Premier League goals after 35 games this season,

Pep Guardiola’s side have already wrapped up the league title in joint-record time in what has been one of the most dominant performances in the history of the competition.

Leroy Sané gave the Citizens the lead at the London Stadium after only 13 minutes when his effort deflected in off Patric Evra, wrong footing West Ham goalkeeper Adrián.

The game was seemingly over before the half-hour mark when a series of mishaps in the West Ham defence led to a Pablo Zabaleta own goal to double the lead of the visitors – goal number 100 on the season.

West Ham restored a glimmer of hope shortly before half-time when Aaron Cresswell curled home a free kick to reduce the score.

However, it was nothing more than hope for David Moyes’ side as Gabriel Jesus restored Manchester City’s two-goal lead within the opening 10 minutes of the restart after being setup by Raheem Sterling.  The England international had already assisted Sané earlier before collecting a hat-trick of assists when Fernandinho made it 4-1 midway through the second half.