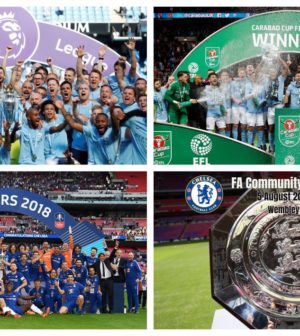 Chelsea have won the 2018 FA Cup with a 1-0 win over Manchester United at Wembley Stadium this afternoon.

Eden Hazard scored the only goal of the cup final with a penalty midway through the first half after the Belgian superstar was brought down inside the penalty area by Phil Jones.

The game saw very few clear-cut chances for either side with José Mourinho‘s side dominating the possession and territory in the second half but failed to break down an organised Chelsea defence.

Thibaut Courtois 7 – The Chelsea goalkeeper had a couple of saves to make but certainly nothing in the way of a difficult one.

César Azpilicueta 9 – The Chelsea defence was excellent in the cup final with Marcus Rashford reduced to long-range efforts and substitute Romelu Lukaku not getting a single sight on goal.  César Azpilicueta cut out numerous crosses and passes around his own penalty area.

Gary Cahill 8 – Thibaut Courtois was well-protected this afternoon as Chelsea’s centre-back trio were well-organised in preventing United getting any clear-cut opportunities.  Captain Gary Cahill made a number of clearances.

Antonio Rüdiger 8 – The German centre-back has ended his first season at Chelsea in good manor and picked up an FA Cup winners’ medal on Sunday with some excellent defending that included blocking a couple of efforts from the Manchester United attack.

Victor Moses 7 – A disciplined performance at right wingback helped by some poor deliveries from Ashley Young down the wing.  Victor Moses didn’t see to much of the ball in what was predominately a defensive performance from Chelsea.

N’Golo Kanté 9 – Threw himself all over the pitch in making tackle after tackle and one interception after another.  Just another day at the office for N’Golo Kanté who added another winners’ medal to his trophy collection!

Tiémoué Bakayoko 5 – Aside from winning a couple of free kicks and aerial battles, Tiémoué Bakayoko did little of note.  Not too many touches on the ball, and when he did, he often gave possession away.  Rarely won it back for his side either.

Cesc Fàbregas 6 – Not the style of football that the Spaniard excels at but Cesc Fàbregas did get stuck in with a few challenges and clearances to relieve his side of pressure.  Looked after the ball when in possession but Chelsea’s attacks were few and far between for Fàbregas to make a big impact.

Marcos Alonso 8 – Had a good battle with Antonio Valencia down the wing in which the Spaniard made a number of challenges.  Marcos Alonso didn’t venture forward as he often does in Premier League games but still drew a save out of David de Gea none-the-less.

Eden Hazard 8 – Drew the penalty from which he converted the match winner, Eden Hazard did have a very good first half despite Ander Herrera doing his best to man-mark him.  The Belgian won numerous free kicks to help slow the game down and give Chelsea the opportunity to attack.  Ultimately the difference between the two clubs at Wembley today.

Olivier Giroud 5 – Another FA Cup winners’ medal for the French striker but Olivier Giroud saw little of the ball, often struggled to hold onto it and didn’t fire in a single shot all afternoon.

Álvaro Morata (2 mins) N/A – Replaced Olivier Giroud in the dying moments of the game to help run out the clock.

Willian (1 min) N/A – Brought on in the final minute to offer more energy and defensive contribution than Eden Hazard.

David de Gea 6 – Dived the wrong way for Eden Hazard’s penalty but otherwise didn’t have much to do for 90 minutes.  Denied Marcos Alonso from close range.

Antonio Valencia 7 – Got forward to support the attack down the right wing but ultimately didn’t unlock the Chelsea defence with any of his passes or crosses in the final third.

Chris Smalling 8 – Can’t fault the centre-back’s performance as he wasn’t involved in the goal.  Otherwise Chris Smalling and the Manchester United defence protected David de Gea well for the rest of the game.

Phil Jones 5 – Caught ball watching and then took Eden Hazard out in the box.  Those seconds of madness ultimately cost Manchester United in the cup final.

Ashley Young 6 – A fine defensive performance as Ashley Young kept Victor Moses quiet all afternoon, but when attacking down the left wing the England international didn’t produce a single cross of use all game.

Nemanja Matić 7 – Saw plenty of the ball versus his former club but aside from drawing a save from Thibaut Courtois with a low, stinging, 30-yard drive, Nemanja Matić wasn’t hugely influential in attack.

Ander Herrera 6 – An energetic display that saw the Spaniard marking Eden Hazard out of the game for the opening 20 minutes.  Then he scored.  Ander Herrera saw a lot of the ball and pushed forward in the second half but ultimately it didn’t lead to anything.

Paul Pogba 6 – A disappointing performance from the French international who fired several long shots off target and missed a free header in the centre of the six-yard box in the final 10 minutes.

Jesse Lingard 4 – Very quiet game down the right wing before being replaced in the final 20 minutes.

Marcus Rashford 5 – Although the stats will say that Marcus Rashford forced two saves from the Chelsea goalkeeper the striker was often outside the penalty area when he needed to be in it and often made life easy for the back three.

Alexis Sánchez 6 – Tried to create things around the penalty area but often found himself coming too deep to collect the ball.  Alexis Sánchez didn’t fire in a single shot on target all game.

Romelu Lukaku (18 mins) N/A – Brought on in search for an equaliser but Romelu Lukaku barely got a touch of the ball in the final 20 minutes.

Anthony Martial (18 mins) N/A – Showed signs he was going to make an impact but ultimately produced nothing of note.

Juan Mata (4 mins) N/A – Simply brought on too late to make an impact.