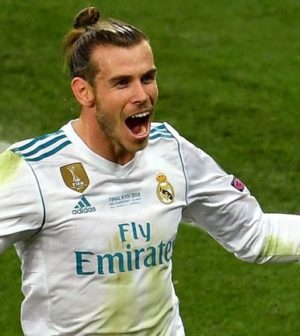 Real Madrid won their third successive UEFA Champions League final and their 13th overall with a 3-1 win over Liverpool at the Olimpiyskiy Stadium in Kiev this evening.

The first half endless goalless with the biggest talking point being a shoulder injury to Mohamed Salah that saw the Egyptian replaced on half hour.  Liverpool had fired nine shots in on the Real Madrid goal when the Premier League Golden Boot winner was on the pitch, but only four during the remaining hour.

The Spanish giants took the lead six minutes into the second half with a bizarre goal that saw Karim Benzema intercept an attempted throw from Liverpool goalkeeper Loris Karius, poking the ball into the unguarded net.

Liverpool were only behind for four minutes when a well-worked corner saw Sadio Mané poke home from close range following Dejan Lovren’s knockdown.

Gareth Bale was introduced on the hour and within four minutes scored one of the greatest goals in tournament history with a stunning overhead kick.

The Welsh international sealed the game eight minutes from time when his long range effort, straight at Karius, was spilled into his own net by the German goalkeeper.

Real Madrid have now won this prestigious trophy four times over the past five seasons.

Kaylor Navas 6 – The Real Madrid goalkeeper wasn’t given a chance with the Liverpool goal and only made one save all evening.

Dani Carvajal N/A – The Spanish right-back went off injured after only 36 minutes.  It is the second consecutive Champions League final in which Dani Carvajal was forced off in the first half.

Raphaël Varane 8 – Solid display from the French international as Roberto Firmino didn’t test Kaylor Navas and Liverpool only produced two shots on target over 90 minutes despite forcing the early pressure.

Sergio Ramos 9 – An excellent defensive performance from the Real Madrid captain who led by example.  Although Mohamed Salah was only on the pitch for half an hour the Liverpool front three failed to really test Sergio Ramos and co aside from the goal.

Marcelo 9 – Real Madrid fans could be forgiven for fearing the worst for Marcelo coming into the match.  But following Salah’s injury the Brazilian bombed forward with freedom and produced the cross from which Gareth Bale scored his stunning bicycle kick from.  Ended the match with two assists from left-back.

Casemiro 6 – Liverpool looked the more threatening in the opening half hour and Casemiro didn’t offer much resistance in the middle of the pitch.  The Brazilian grew into the game and his workload got a lot lighter as Madrid dominated the proceedings.

Luka Modrić 8 – Was the best midfielder of the central three defensively as Luka Modrić made a number of tackles to win the ball back for his side.  The Croatian was also immaculate on the ball.

Toni Kroos 8 – The German star was key in turning possession in Real Madrid’s favour and helped get them on their first few attacks when they finally got into the game in the last 15 minutes of the first half.  Toni Kroos saw a lot of the ball and rarely gave it away all evening.

Isco 6 – An untidy and careless start before growing into the game.  Isco did hit the crossbar before being replaced by match winner Gareth Bale on the hour.

Karim Benzema 8 – Excellent hardworking display from the striker who got his just rewards by interception Loris Karius’ roll out to open the scoring in bizarre fashion.

Cristiano Ronaldo 6 – A quiet evening from the superstar who drew just one save out of the Liverpool goalkeeper and saw fewer touches than nearly all of his teammates.

Nacho (65 mins) 7 – Came on for the injured Dani Carvajal at right-back and wasn’t greatly tested as Real Madrid started to dominate proceedings from that point in the first half.

Gareth Bale (30 mins) 10 – Two goals in a half-hour outing to win the Champions League!  What more could have been asked of Gareth Bale?

Marco Asensio (3 mins) N/A – A late run out with the game won and an opportunity for the travelling Real Madrid supporters to give Karim Benzema a round-of-applause.

Trent Alexander-Arnold 6 – Had a reasonable game up against Cristiano Ronaldo but Marcelo caused problems bombing on from left-back.

Dejan Lovren 7 – Karim Benzema was largely kept quiet inside the penalty area and Dejan Lovren nodded the ball down nicely for Liverpool’s goal.  Careless in possession once too often.

Virgil van Dijk 6 – Although Real Madrid weren’t tested Loris Karius left, right and centre, Virgil van Dijk wasn’t overly secure at the back and was sloppy in distributing the ball, conceding possession in his own half on more than one occasion.

Andy Robertson 7 – A superb tackle to deny Cristiano Ronaldo one-on-one.  Cannot be faulted for any of the goals.  Didn’t get as many crosses into the box as he has been doing over the past couple of months.

Jordan Henderson 6 – Looked after the ball when in possession but offered no creativity from centre midfield.  Real Madrid dominated possession too.

James Milner 6 – Covered a lot of ground in an energetic display but didn’t see much of the ball.

Georginio Wijnaldum 6 – Real Madrid saw the majority of the ball as Liverpool’s central three failed time and time again to pinch it back.

Mohamed Salah N/A – In tears as he left the field in the first half with a shoulder injury.  There had been very few opportunities to that point and Mohamed Salah hadn’t seen any of them.

Roberto Firmino 5 – A quiet game for the Brazilian who struggled to get involved and never tested Kaylor Navas.

Sadio Mané 8 – A good display from the Senegalese international who scored Liverpool’s equaliser and struck the outside of the post.  Sadio Mané was certainly the Reds’ best attacking threat.

Adam Lallana (60 mins) 4 – Wouldn’t have been expected to have been introduced so early but Adam Lallana failed to get into the game and quite frankly, barely touched the ball over the course of an hour.

Emre Can (8 mins) N/A – Introducing move at 1-2.  Liverpool conceded almost immediately after Emre Can came on.