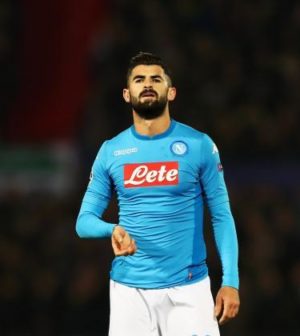 If you believe a report by the Express today, Maurizio Sarri is on his way to London to finalise a deal that will see him become Chelsea manager. The Italian has constantly been linked with a move to Chelsea in the last few weeks and from a number of outlets, they believe he will join the Blues before the end of next week.

In this article, we will be looking at five players we believe Sarri would likely want to sign for Chelsea assuming he takes over the managerial job.

Although Chelsea have the likes of Victor Moses and Davide Zappacosta at right wingback in their team, both are known to be inconsistent and it would not be a surprise if Maurizio Sarri decides to bring in another option here. Elseid Hysaj was one of Napoli’s best players last season. He is a player Sarri trusts and could want to bring with him to Chelsea. The fact that Hysaj can also play as a left-back makes it even more interesting. His market value according to transfermarkt is currently €25 Million (£22.1m) which is a price Chelsea can easily afford.

Chelsea have been on the case of the Senegalese centre-back for sometime now. Last summer, the Blues reportedly had multiple bids rejected by Napoli for him. The presence of Sarri as Chelsea manager could however change all of that. With David Luiz falling out-of-favour and Antonio Rüdiger inconsistent, the incoming Chelsea boss may make an attempt to sign his trusted centre-back.

Álvaro Morata flattered to deceive during his first season in Chelsea colours. Many Chelsea fans would like to see the back of the Spanish striker already. And he could well be on his way to Juventus with murmurs in the press about an interest from the Serie A champions for the former-Real Madrid man. Should Juventus firm up their interest in the player with a bid, I doubt Chelsea would stand in their way, especially if the Old Lady signing Morata would give the Blues an opportunity to sign Gonzalo Higuaín in return. Higuaín was a key player under Sarri during the 2015-16 season where he scored 38 goals – the best numbers of his career. Could a reunion at Chelsea be on the cards? We will soon find out.

Any Chelsea fan who is sincere will agree that there is a real chance of Real Madrid signing Thibaut Courtois this summer. The Belgian international has so far refused to sign an extension to his current deal at Stamford Bridge which means there is a real chance of Chelsea selling him if Real Madrid make an offer that they consider good enough. His replacement could well be AS Roma’s Allison Becker. The Brazilian was linked with Napoli not too long ago which is an indication that Maurizio Sarri likes him and should he manage to bring him to Chelsea, it would be a good replacement for Courtois – should the Belgian leave.

With Pedro’s best days behind him and Willian looking likely to leave Stamford Bridge this summer, Chelsea could do with a quality player like Dries Mertens in attack. Should Mertens join the West London club he would further increase the number of Belgians at Chelsea. He and Eden Hazard have been playing on opposite sides of the attack for Belgium at the 2018 World Cup and could replicate the same form at Chelsea if Sarri decides to move for the highly-rated attacker. Napoli would surely not want to sell but with Hazard and Courtois already at Chelsea, coupled with Sarri (if he joins), the Blues may have success in signing him.