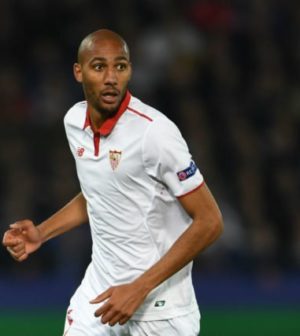 Despite reportedly having agreed a deal to sign Lucas Torreira from Sampdoria, Arsenal are still bengi linked with several central midfielders. Only a few days ago did news break that the Gunners were one of the clubs who are interested in the signing of Barcelona’s André Gomes. However, Sky Sports are reporting that the Premier League giants are in talks to sign Sevilla and France midfielder Steven Nzonzi instead.

The former-Stoke City star reportedly has a £35 million release clause has been linked with a move to Arsenal in the last few weeks, which is quite a surprise. With Granit Xhaka and Mohammed Elneny already at the Emirates and Lucas Torreira increasingly likely to sign for the Gunners, Nzonzi would really not be needed, unless someone is set to be sold.

If Arsenal were to sell someone, it is most likely to be Elneny. The Egyptian was linked with a move to Leicester City last summer and with Arsenal said to only have a transfer budget of £70 million, some players need to leave if Unai Emery intends to spend more than that earmarked figure.

I firmly believe Elneny is most likely to be sold this summer if Arsenal’s interest in Nzonzi is real. Aside from Elneny, Xhaka may also be leaving, especially as it is unlikely that Nzonzi would move to the club and sit on the bench. Granit Xhaka had a terrible start to last season and has been bang average at best in Arsenal colours since joining the club in 2016. Though it could simply be that Emery isn’t a fan of the Swiss international and wants to bring in Nzonzi from his former club to replace him.

Another possibility is that Aaron Ramsey will be sold. This is quite possible if you consider the fact that the Welsh international still hasn’t signed a new contract with the Gunners. Could Emery be bringing in Nzonzi so Xhaka can play the Ramsey role, while Torreira and Nzonzi protect the back four and Mesut Özil players on the right side of midfield?

Most Arsenal fans would prefer Ramsey to stay. Then if Torreira comes in, Arsenal certainly don’t need Nzonzi unless Xhaka leaves. But if Ramsey doesn’t sign a new contract soon, it wouldn’t be a surprise if Arsenal sell him as the club won’t want to be in the same situation they found himself with Mesut Özil and Alexis Sánchez last summer…

Steven Nzonzi is part of the French national team who booked their place in the 2018 World Cup semi-finals with a 2-0 win over Uruguay on Friday.  Didier Deschamps’ side are set to take on Belgium for a place in this year’s final.